Deleted Scene & Giveaway: SOMETHING WORTH DOING

SOMETHING WORTH DOING
A Novel of an Early Suffragist
by
Jane Kirkpatrick
Genre: Christian Historical Fiction
Publisher: Revell
Publication Date: September 1, 2020
Number of Pages: 336
Scroll down for the giveaway! 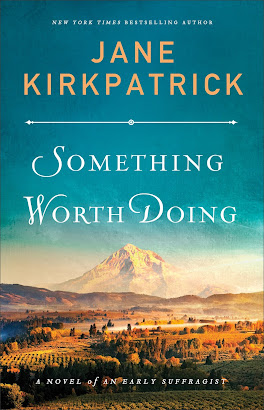 Some things are worth doing—even when the cost is great In 1853, Abigail Scott was a nineteen-year-old schoolteacher in Oregon Territory when she married Ben Duniway. Marriage meant giving up on teaching, but Abigail always believed she was meant to be more than a good wife and mother. When Abigail becomes the primary breadwinner for her growing family, what she sees as a working woman appalls her—and prompts her to devote her life to fighting for the rights of women, including the right to vote.
Based on a true story, Something Worth Doing will resonate with modern women who still grapple with the pull between career and family, finding their place in the public sphere, and dealing with frustrations and prejudices when competing in male-dominated spaces.
PRAISE FOR SOMETHING WORTH DOING:
"I have long admired Jane Kirkpatrick's rich historical fiction, and Something Worth Doing is well worth reading! Oregonian Abigail Duniway is a vibrant, fiercely passionate, and determined activist who fought for women's suffrage. Women of today have cause to respect and admire her—as well as the loving, patient, and supportive husband who encouraged her to continue 'the silent hunt.'" —Francine Rivers, author of Redeeming Love
"On the trail to Oregon, young Jenny Scott lost her beloved mother and little brother and learned that no matter what, she must persist until she reaches her goal. Remembering her mother's words—'a woman's life is so hard'—the young woman who became Abigail Scott Duniway came to understand through observation and experience that law and custom favored men. The author brings alive Abigail's struggles as frontier wife and mother turned newspaper publisher, prolific writer, and activist in her lifelong battle to win the vote and other rights for women in Oregon and beyond. Jane Kirkpatrick's story of this persistent, passionate, and bold Oregon icon is indeed Something Worth Doing!" —Susan G. Butruille, author of Women's Voices from the Oregon Trail, now in a 25th anniversary edition
CLICK TO PURCHASE
Amazon ┃ Barnes and Noble ┃ Bookshop.org
Christianbook.com ┃ IndieBound ┃ Revell 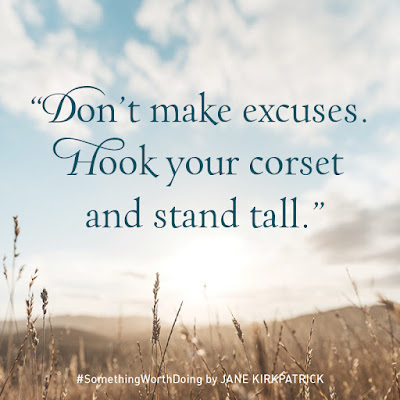 Deleted Scene from Something Worth Doing

Scenes left on the cutting room floor . . . Wisps of this scene are still in Something Worth Doing, but this was one of what I call “outtakes,” which are scenes I like and don’t want to cut but that seem too long and take the reader where I want them to go, but the character isn’t quite so sure of that. I pull the whole scene out and save it as an outtake. Sometimes it comes back in; often it doesn’t.

This scene is between Abigail and her sister, and it felt like I was “telling” the reader how Abigail didn’t always feel that she was a great mother, her work taking her away often. I ended up reworking the novel as a whole to create more opportunity for readers to “see” Abigail as a good mother and, at the same time, as one who struggled with her career, knowing that to pursue women’s rights and getting women the vote often meant being away from home for weeks—sometimes months—at a time.

This scene had too many things going on, especially toward the end with two new named characters who do not appear in the finished book! And the scene was to be about Abigail and her parenting, not about her frustration with Ben bringing his friends around. That’s another scene!

“I don’t suppose the Argus newspaper needs filtering though, does it?” Catherine bounced Clara on her hip while Abigail knelt on the warm earth setting vegetable starts in the garden, carrots and beans she’d been nurturing in egg shells and potato boats since March. Abigail patted the ground around the seedlings. It had been a wet, cool spring and now summer had burst upon them. Her seedlings begged to bloom. Catherine’s visit was a boon to Abigail when the two could talk about teaching and writing and life, pleasant interruptions to her wifely duties.

“The Argus deals with hide prices and women’s recipes so we can’t get into too much trouble reading it. But the articles don’t stimulate the mind much either and persons needs that, even farm wives. At least I do. Read News of the World and the Spectator, just don’t accept everything as gospel.”  She lifted her eyes in time to watch a breeze flutter across the field brushing bachelor buttons, grasses, the movement easing toward them like an invisible wave until it reached her seedlings and cooled her face. “Did you see that?”

“The way you can actually see weather changing. All was quiet and then with barely a flutter, the entire field began to wave and carried the breeze right here.”

Catherine shrugged her shoulder; looked confused by why such an observation would mean so much to Abigail.

“Never mind,” Abigail said. “I suppose I’m twisted as an old oak, finding metaphors where no one else does. It’s that change happens so invisibly at times, one hardly notices. Like Clara. Just yesterday she babbled like she carried on a conversation with inflections and bursts of sounds that made no sense and then this morning, voila! She said ‘mama mama’.”

“I’ve been working with her on that.” Clara bobbed her head toward Catherine’s. She’d seen her sister and daughter perform that little finish of an interaction, almost like a punctuation. A tiny stab of envy pierced her. That was silly. She and Clara had little dances, too, though a few looked like tangoes rather than a waltz.

“Your teaching gifts are showing then,” Abigail said. She kept her gaze at the field where all the foliage whispered, aspen leaves fluttered. She decided then to write something down about what she’d seen, how change crept up on people when not expected, how the language of the landscape spoke as loudly as words sometimes.

She stood wanting to keep the images in her mind until she could put them to paper but then Ben came into view, riding from a distance. He wasn’t alone and Abigail’s stomach lurched. She loved the man but she was tired and Ben had a way of attracting friends, mostly bachelors, who had no problem accepting Ben’s invitation to stick their boots beneath the Duniway table. She wished one of them would marry so she could have a friend or two to talk to while the men smoked their pipes and waited for her to boil potatoes, fry up liver and add caramelized onions.

“At least it isn’t on wash day,” Abigail said. She gasped as she turned toward the house.

“I haven’t been right since Clara’s birth,” Abigail said. “But I’m able to sit up and take nourishment. Not to worry. But I’ll let you carry Clara in. My back…not to mention my stomach wants to be a whirlpool.”

Catherine helped Abigail stand as the riders came into the yard.

“We have guests, Mrs. Duniway.” Ben doffed his hat to her, nodded to Catherine then swept his hat to indicate his two friends. Abigail knew them. Bryce and Joshua. They worked on neighboring farms several miles distant. Abigail thought of the woman at that farm relieved of two for supper though she’d have them back for breakfast come morning. 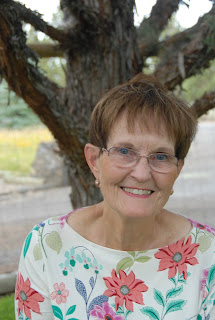 Jane Kirkpatrick is the New York Times and CBA bestselling and award-winning author of more than thirty books, including One More River to Cross, Everything She Didn't Say, All Together in One Place, A Light in the Wilderness, The Memory Weaver, This Road We Traveled, and A Sweetness to the Soul, which won the prestigious Wrangler Award from the Western Heritage Center.
Her works have won the WILLA Literary Award, the Carol Award for Historical Fiction, and the 2016 Will Rogers Gold Medallion Award. Jane divides her time between Central Oregon and California with her husband, Jerry, and Cavalier King Charles Spaniel, Caesar.
Website ║ Bookbub ║ Facebook ║ Twitter ║ Pinterest ║ Amazon ║ Goodreads
---------------------------------
GIVEAWAY! GIVEAWAY! GIVEAWAY!
THREE WINNERS!
1st: Copy of Something Worth Doing + Oregon Map Bag
+ $25 Barnes and Noble Gift Card;
2nd and 3rd:
Copy of Something Worth Doing + $10 Barnes and Noble Gift Card.
SEPTEMBER 15-25, 2020
(US ONLY) 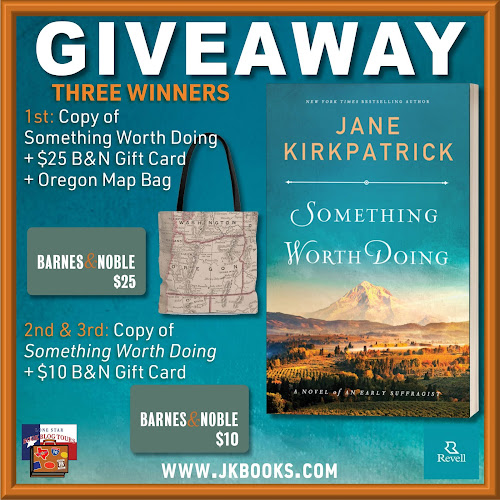