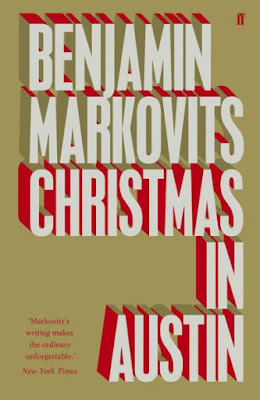 I reviewed Christmas in Austin (Faber & Faber) by Benjamin Markovits for Lone Star Literary Life. This is a profoundly intimate, psychologically complex and astute rendering of family ties. You'll think Markovits has been eavesdropping on your family holidays.

Fifteen Essingers (including a couple of significant others) are convening for Christmas at Liesel and Bill’s home in Austin where the four Essinger siblings—Nathan, Susie, Paul, and Jean—grew up. Each of the children brings news: Nathan is being vetted for the federal judiciary; Susie’s husband, David, has accepted a position at Oxford, and they’ll be moving to England in the summer; Paul has broken up with Dana, the mother of their four-year-old son, Cal; and Jean is bringing her fiancé, Henrik, who is her boss and not yet divorced from his first wife.

Over the course of a week, the Essingers grapple with priorities; family old, new, and contemplated; expectations, disappointments, and triumphs; ambition, competition, and ennui; beginnings, endings, and driftings; and shifting allegiances in a profoundly intimate, psychologically complex and astute rendering of family ties.

Christmas in Austin is the follow-up to A Weekend in New York, published in the United States in February of this year, in which Benjamin Markovits introduced the Essinger family. Markovits returns to the concepts of intimacy and loyalties throughout the text (“Part of the point of coming home was the density of association, you seemed to move through a thicker material.”), delivering emotional truths between generations and genders, packed with minutely observed, small moments that are everything—the profound quotidian.

The large and mobile cast is unwieldy but never hard to keep track of. Each character is a complicated, nuanced individual—they could walk right off the page into your kitchen and rummage in the fridge. Markovits employs an egalitarian approach: The story unfolds in multiple third-person narrations; we spend time in each character’s head on a rotating basis. You will find  that the point of view with which you were roasting the Christmas goose has switched, mid paragraph, to whomever is mashing the potatoes.

The dialogue around the table is a feat of ellipses, making you suspect that Markovits has been eavesdropping on your family holidays. Being immersed in family also inevitably means tedium—being trapped inside a navel-gazing head is claustrophobic—and too much information. We don’t need to know this much about their toilet habits.

There are innumerable conflicts in Christmas in Austin, both external and internal. Old World European values are baffled by American fetishes; duty and personal fulfillment face-off; old resentments and patterns compete with fresh slights and joys. There are class issues here between the shucks-we’re-just-folks of a certain kind of well-off Americans, the patrician New England, and the glamourous extravagance of Manhattan. The Essingers are a privileged tribe of upper-middle class, Ivy League educated Anglos, and they know it. The youngest generation is beginning to wrestle with the implications; the older generation is bewilderedly resistant; while the middle generation acknowledges it, expressing a sort of noblesse oblige, as in this disquieting conversation between Nathan and Paul at a Boxing Day party:

Some of the people here are serious people. You underestimate what it takes to be a person of influence.
Okay, Paul said.
All of us were born into enormous privilege.
I’m aware of that.
I’m not sure you are. We’re in a position, Nathan began, and then he said: We have the chance to live unusually good lives.
Not everybody wants to be Judge Kirkendoll.
Because they don’t want to do what you have to do.
Because they don’t want it, Paul said.
Well maybe they should. Because if we’re not going to do it, who will?

It’s possible that the first truly honest conversation happens at the end of the book, and the conflict set in motion evokes real fear and seems to set up another Essinger novel—another big, glorious mess.