Review: SEVEN SAMURAI SWEPT AWAY IN A RIVER 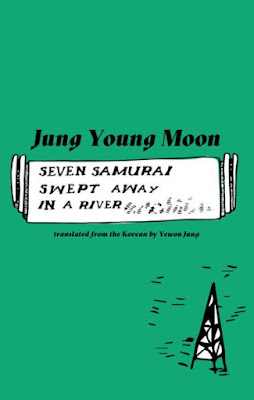 I reviewed Seven Samurai Swept Away in a River (Deep Vellum Publishing) by Jung Young Moon (translated from the Korean by Yewon Jung) for Lone Star Literary Life.

FICTION
Jung Young Moon (trans. from the Korean by Yewon Jung)
Seven Samurai Swept Away in a River

In the fall of 2017, knowing nothing of Texas except “a notorious Texas” (Oswald, Bonnie and Clyde, No Country for Old Men), Jung Young Moon arrives for a writer’s residency at 100 West Corsicana. After he arrives in that small East Texas town, Moon sets out to learn what makes a “true Texan.” His quest involves the eternal debate about whether chili with beans is chili, longhorn cattle, the seasonal appropriateness of different cowboy hats, two-stepping, the inordinate number of wild turkeys, cowboy churches, and ordering a soda when every soda is a “Coke.”

Seven Samurai Swept Away in a River is the latest novel (?) from award-winning Korean writer and translator Jung Young Moon. In his trademark stream-of-consciousness style, Moon admirably grapples with himself and the peculiarities and paradoxes of twenty-first-century Texas, while questioning what has meaning and what doesn’t, who gets to decide, and the nature of the novel as a literary form.

This writer doesn’t like rules and is baffled by conformity, gripped by a profound melancholy. “[He’d] reached the point of skepticism where [he] really was not sure if a novelist should create problems and conflicts among fictional characters when the world itself was rife with problems.” Accordingly, the problems and conflicts of Seven Samurai are internal, except for the chili. The melancholy is such that I was startled when Moon visits a farm and notes “a very cute donkey.”

Moon crafts page-long sentences that do not meander; his musing is focused—hats off to translator Yewon Jung. Moon also exhibits a joy in words: he “always wanted to say something good if possible about gooseberries,” simply because the words “goose” and “berry” were conjoined. His repetition of certain words lends a meter to his prose, as if he might be a poet. A particularly moving passage involves an old woman, the proprietor of an antiques storefront in Corsicana, who seems to Moon to be even older than her goods, as if “it would be all right to put your hands together and make a wish while looking at the woman.”

While Moon claims not to feel an interest in much of anything, he seems interested in everything, observing details which inspire mental leaps and connections. In the farmhouse, there was “a wolf skin with the head intact laid out flat on a single bed which looked either like an altar on which a wolf had been offered as a sacrifice, or like an altar exclusively for worshiping wolves.” Moon has a droll, dry wit that reminds me of Steven Wright and had me chuckling aloud. Thinking about thinking, he is astonished by what goes on in other people’s minds: Why did Jack Ruby bring his dogs along on his mission to shoot Oswald?

In the end, Moon gains an appreciation for oak trees and acorns but declines to take a position on the chili controversy. Seven Samurai ends on a hopeful note.