I reviewed An Equal Justice (Thomas & Mercer) by 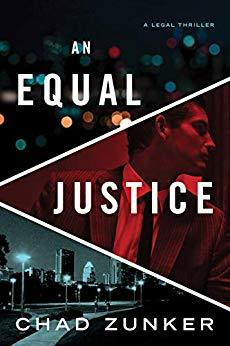 Austin's Chad Zunker for Lone Star Literary Life. Zunker shines when his homeless characters and the people who work with them take center stage in this first installment of a new legal-thriller series. This is a good choice for Thanksgiving.

Benny Dugan, sixty-two, is searching the downtown alleys for a young man who didn’t show up for his kitchen shift at the homeless camp in East Austin where they both live. Dugan has been living on the streets for more than fourteen years, but he’s unsettled tonight, worried about his missing neighbor and suspecting that he’s being followed. Dugan doesn’t make it out of the alley alive.

Six weeks earlier, David Adams had arrived in Austin for his dream job at Hunter & Kellerman, the city’s most prestigious white-shoe law firm. A West Texas football star who grew up in grinding poverty after the death of his father, Adams went to college on a sports scholarship and then worked his way through Stanford Law. The posh offices in the Frost Bank Tower and his swanky new apartment in the Austonian are everything he’s always wanted, but the apparent suicide of a fellow attorney and the murder of his new friend, Dugan, force Adams to confront what’s really going on with Hunter & Kellerman.

An Equal Justice by Austin’s Chad Zunker is the first volume in his new legal thriller series starring David Adams. The author dedicates this book to Alan Graham, co-founder of Austin’s storied homeless outreach organization, Mobile Loaves and Fishes (read our review of Graham’s book, Welcome Homeless: One Man’s Journey of Discovering the Meaning of Home), who introduced him to Austin’s homeless population more than a decade ago. In An Equal Justice Zunker marries, with mixed results, his preferred genre, thrillers, with his passion for social justice; however, there are gems scattered throughout this novel, and I anticipate smoother results in the next installment.

There are clues amidst the glitter that all is not well (people with secrets shouldn’t drink so much), but Adams discounts his misgivings, even when he is explicitly warned by a colleague at his first firm dinner. Comparisons to Grisham’s The Firm (Doubleday, 1991) are unavoidable; the seduction of big money and a luxe lifestyle are, for a time, effective blinders to ambitious young men from modest means.

Zunker constructs a plot that flows well and deftly reveals the cracks in the façade. He skillfully inserts twists that intrigue and keep the pages turning. He gifts his characters with rich back stories that explain their present circumstances and their motivations, good and bad.

There are some awkward word choices, and Zunker slips into stating the obvious, but there are also apt, sometimes playful, descriptions. Adams decides he could build a fort around his desk with all of the files he has to work on, and he likens plucking a cell phone from the hands of his sleeping boss to Operation, the classic children’s game.

The Range Rovers, Calvin Klein suits, Gulfstream jets, and the vapid personalities of Adams’s new clique become tiresome quickly, but Zunker shines when his homeless characters and the people who work with them take center stage. Dugan’s tent in the homeless camp is half the size of Adams’s closet. When Adams and Dugan meet, Adams decides that Dugan “either held the keys to peace, or he was as crazy as a loon.” Discovering which of those possibilities is true is one of the main pleasures of An Equal Justice.

The next book in the David Adams series, An Unequal Defense, is expected in May of 2020.