Review: AIN'T NOBODY NOBODY 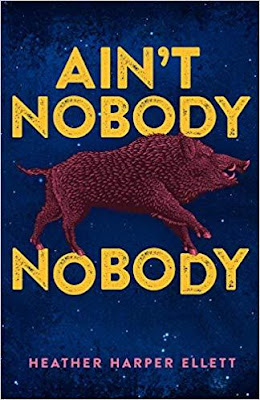 I reviewed Ain't Nobody Nobody (Polis Books) by Dallas's Heather Harper Ellett for Lone Star Literary Life. "Full of sharply drawn characters and deeply rooted in the East Texas Piney Woods, Ain’t Nobody Nobody is part rural noir, part Carl Hiassen, and all about the compromises of desperate people faced with competing moral choices, the triumph of hope, and the power of grace, leavened with laugh-out-loud dialogue and rich language."

hero (noun)
1a: a mythological or legendary figure often of divine descent endowed with great strength or ability
b: an illustrious warrior
c: a person admired for achievements and noble qualities
d: one who shows great courage

Randy Mayhill has always wanted to be a hero (“saving women named Clementine and Maybelle”), but it hasn’t quite worked out yet. Stripped of his sheriff’s badge due to the circumstances surrounding the apparent suicide of his best friend, Van, Mayhill has practiced “hermitry” and redoubled his devotion to Van’s family, Birdie and Onie. Out hunting feral hogs (“pork vermin”) with his dogs one morning, in his pajamas (“boxers, holster”), Mayhill spies buzzards circling over Van’s homestead; he hurries over, eager to be of service, to find a dead man draped over Birdie and Onie’s fence. They claim not to know who the dead man is, but, in Mayhill’s judgment, his loved ones may have something to hide, so he sets about plotting to disappear the body with “a bucket of corn and two dozen packets of strawberry Kool-Aid.” Ew.

But before Mayhill can set his plot in motion, the body vanishes. As he begins an investigation aimed at protecting Birdie and Onie, Mayhill finally gets his chance to be a hero, even while “guilt makes a man do troublesome things.” And whatnot.

Ain’t Nobody Nobody is Dallas-ite Heather Harper Ellet’s debut novel. Full of sharply drawn characters and deeply rooted in the East Texas Piney Woods, Ain’t Nobody Nobody is part rural noir, part Carl Hiassen, and all about the compromises of desperate people faced with competing moral choices, the triumph of hope, and the power of grace, leavened with laugh-out-loud dialogue and rich language.

It is obvious that Ellett, who grew up in East Texas near Lufkin, spent many an afternoon on the front porch soaking up the elders’ tall tales, philosophical musings, and speech patterns. To this potent mix she’s added her education in creative writing and psychology to craft a smart, empathetic portrait of a place and people who are often unfairly portrayed as ignorant and hopelessly backward. Ellett is fond of her subjects and feels the economic struggles of “stranded” people, all without letting them off the hook for repeatedly choosing poorly. As the title asserts, everyone is someone.

Ain’t Nobody Nobody is told in multiple limited-third-person points of view, which move back and forth in time, pre- and post-Van, sometimes addressing the reader directly. This is a complicated construction, and while occasionally confusing, Ellett skillfully handles the intricacies of her well-constructed plot. Ellett sets the hook on page six, then the action moves steadily forward, picking up the pace with palpable tension as the final showdown approaches.

One of the greatest joys of this debut is its literary sensibility, setting it apart from genre. Symbolism and metaphor abound. The scourge of ubiquitous feral hogs shows us a symbol of domestic fertility and abundance gone wrong; wild hogs are symbols of lust and overindulgence, signifying greed. The hummingbirds that frequent Birdie and Onie’s front porch are signifiers of tenacity, continuity, and endurance. Planning for Van’s funeral, Onie debates appropriate passages from Thoreau with the good reverend. Grammar and punctuation are addressed in the venue of the local weekly newspaper, which has

problems of the hillbilly variety: a regular confusion of “there” and “their,” and more maddeningly, a confusion of “it’s,” “its,” and “its'.” ITS', of course, being the jackalope of the English language.

Humor suffuses Ain’t Nobody Nobody. From the acerbic to corny, wit is necessary, especially when your illusions are stripped away. The careful detail in the language is like finding a present hidden just for you. Cats “scatter like mice,” mourners “quiver like divining rods,” Onie and the reverend “bobbed their tea bags feverishly in their cups as if they were stabbing something to death at the bottom of them.” Ellett is almost as adept at raw emotion, which will whipsaw you after you’ve grown used to the narrative being funny. Don’t get too comfortable.

The ending will surprise you, first with the audacity of the author and then with admiration for her. Appropriately, in the same vein as all that came before, I was left a little teary but with a bark of laughter, eyes wide, and my hand clapped over my mouth. Live in active voice, y’all.