Review: TO SQUEEZE A PRAIRIE DOG 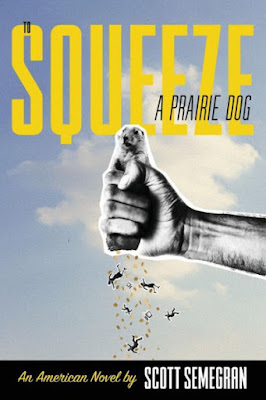 I reviewed To Squeeze a Prairie Dog: An American Novel (Mutt Press) by Austin's Scott Semegran for Lone Star Literary Life. Semegran lures you in with a combination of sardonic wit and slapstick comedy, but before you know it, you’re contemplating issues of money, class, media, politics, the social contract, and the many possible definitions of success.


“If any animal has a system of laws regulating the body politic, it is certainly the prairie dog.”—George Wilkins Kendall, Texan Santa Fe Expedition

J.D. Wiswall is an earnest and modestly ambitious young man from Brady (“The Heart of Texas”) come to seek his fortune in Austin, the blue beating heart hosting Texas state government. Wiswall is the newest data-entry clerk in the Texas Department of Unemployment and Benefits. His new colleagues are Rita Jackson, den mother; Deborah Martinez, policy-and-procedures manual expert; and Conchino Gonzalez, gearhead who texts his coworkers instead of speaking aloud (mostly). On his first day on the job, Wiswall stumbles across his new boss, Brent Baker (guitarist and layabout), passed out behind the Vietnam veterans’ monument on the capitol grounds.

Each of these characters has wants and needs beyond what their lives have been able to afford them, and money is in short supply. A flyer tacked to the office bulletin board sets up the inspiration and ensuing conflict:


STATE EMPLOYEES COST-SAVINGS SUGGESTION PROGRAM
$10,000 REWARD
For the best suggestion that saves the State of Texas money and time.
Do YOU have any ideas?

Jackson explains to Wiswall that the office has an agreement to share the reward should any of them come up with a winning suggestion. It’s that or the lottery, for which they have an ongoing office pool.

To Squeeze a Prairie Dog: An American Novel is the latest book of comedic literary fiction from Austin’s Scott Semegran. This new novel is entertaining and thought-provoking. Semegran lures you in with a combination of sardonic wit and slapstick comedy, but before you know it, you’re contemplating issues of money, class, media, politics, the social contract, and the many possible definitions of success.

Semegran’s characters are diverse, working-class, complex, and supplied with backstories that inform their actions and motivations. The office cast is a collection of ordinary eccentrics who, as we all know, make the world go round. Wiswall, who I think is on the spectrum somewhere, is an innocent neophyte, seemingly a novice to the twenty-first century, though he is oddly suited to Austin, where he insists on risking life and limb riding his bicycle to work from his “backyard shack” in Hyde Park. “Even when he cussed in his mind, his cussing was toned down [Dang it!] as if someone might hear him.”

The governor of Texas is part LBJ and faux-gold-plated. “You know, Austin is a cesspool of progressives and liberals! But, where you find liberals, you will also find craft products. And liberals distill a fine whiskey.” The governor’s press conferences are parody, descending into what we used to think was farce before it became reality. Meanwhile, the media bosses are focused on clicks that deliver real gold.

Semegran has a distinctive, sly style, but he’s not a one-trick writer. His pacing is steady and generally quick, plot twists are surprising, and he knows how to close a circle. The scenes between Jackson and her adult children and grandchildren are genuinely touching, even if they often “warmed her heart to help … even though it uneased her mind.” Martinez, with her ungrateful adult offspring, car-title loan, and red wine, elicits not just sympathy but real concern from the reader.

Kudos to Semegran and team for an original, hilarious cover design, though a copyedit would benefit the next printing. My only quibble with Semegran’s writing is his habit of over-explaining: “[Baker] was diligently writing on sheets of paper, but what the others couldn’t see was that he was drawing doodles of cartoon ducks, not writing anything of importance.” Trust your reader.

The sugar ants in the office are a fitting metaphor for those individuals considered small and insignificant but who march along and get things done. They are also a cautionary tale, easily diverted from the nutritious and filling by the temporary sugar high of cheap carbs—crumbs that distract from the feast. There is no jobs ladder—it’s a pyramid. As Jackson muses, “… it was hard to pull yourself up by bootstraps when you couldn’t afford the boots …”

To Squeeze a Prairie Dog concludes on just the right note and contains depths you won’t expect.