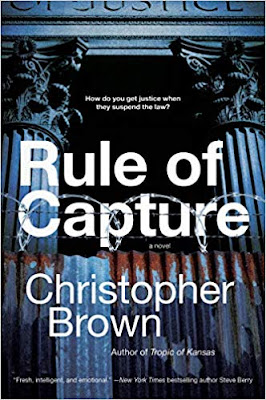 I reviewed Rule of Capture (Harper Voyager) by Austin's Chris Brown for Lone Star Literary Life! Y'all, this novel is unputdownable. Brown has taken all the dissonant noise and distilled it, then extrapolated to a possible logical endpoint. He may be a witch, but let's hope he's not a soothsayer.

What happens when the “people with the power and money . . . know democracy is no longer on their side”?

The United States has lost an orbital war with China, and now you need a passport to visit Hawaii—if you can get a passport, that is. Passports are now apps, which can be revoked from D.C. at will. The US is sliding toward another civil war after a controversial election, and the reigning executive is cracking down on dissidents who think dictatorship is a bad idea.

Enter Danny Kimoe, a Houston attorney who takes appointments from the court, doing his hamstrung best to defend these subversives, who are tried by star chamber. His newest client is Xelina Rocafuerte, a young filmmaker who was in the wrong place at the right time. The government suspects she has evidence of an assassination committed by friends of the regime. As Kimoe attempts to free his client from specious charges (propagandist for the insurrection), he finds that another of his cases is tied to Rocafuerte’s and stumbles into a conspiracy that threatens not just his clients, but the entire country.

Christopher Brown’s second novel, Rule of Capture, is set in the world of his first, Tropic of Kansas (Harper Voyager, 2017), a dystopian future of environmental and political catastrophe, the United States broken into warring territories. Rule of Capture is the first in a planned series of legal thrillers, and if this first installment is any indication, I will buy the others the day they appear on shelves, mute my phone, and cancel all appointments for the next couple of days. Rule of Capture is part 1984, part Brave New World, part ripped from the Mueller report, though it transcends the current occupant of the White House. Brown has taken all the dissonant noise and distilled it, then extrapolated to a possible logical endpoint.

Flashback chapters set up the premise, personally regarding Kimoe, nationally, and internationally. It’s not necessary to have read Tropic of Kansas before you pick up Rule of Capture. Brown’s narrative flows seamlessly and efficiently, weaving several subplots into the big picture.

Kimoe is a flawed hero, an every-man with a dry, acerbic wit, though naïve and somehow still trusting. An idealist struggling against the evidence that the promise of the country has not been realized (“The future is not your private property, you little trust fund commandos.”), you’ll want to root for him.

Rule of Capture is also very funny. Sometimes it’s a sly wit: “The Nebraskans of the Platte River plains had taken over many of the corner stores in recent years, relying on kinship networks and the informal credit systems they had brought from back home . . . ”; sometimes a wink and a nod—Mayor Donald Barthelme. It is also educational: the lawyer in Brown provides an exposition on the legal theory of the rule of capture—"the Dred Scott of real estate law.”

Brown’s descriptions are vivid, and he’s quite good at trippy dreamscapes in which Kimoe and James Madison have a few beers around an alley trashcan fire, like “a mix between Federalist No. 43 and a drunk poetry reading.”

Brown’s use of language is clever and smart, while instances of purple prose and pedantic speeches, which would be so easy to do given the material, are few. No detail is too small—read every word: an account user name is gaia_llorona; TV pundits “strafe each other with bullet points”; there are “international disaster capitalists” and “catastrophe bonds, which sounded like complex bets on permutations of apocalypse”; a piano man plays “California Über Alles”; the goal of some dissidents is an “Edenic post-racial eco-Texatopia.”

Brown grabs us with the first sentence: “In the year of the coup, Donny Kimoe spent Monday mornings at the federal courthouse trying to help torture victims remember what happened to them in lockup over the weekend.” And he never lets go, intricately plotting and carefully crafting a just-one-more-chapter page-turner about a future that is all too plausible. Brown may be a witch, but let’s hope he’s not a soothsayer.