Review: KING OF THE MISSISSIPPI by Mike Freedman 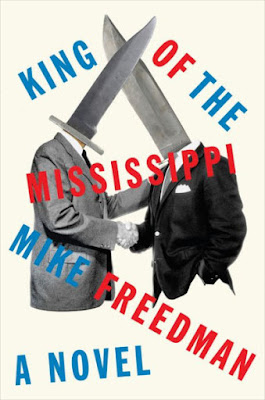 I reviewed King of the Mississippi (Hogarth) by Houston's Mike Freedman for Lone Star Literary Life. Beware the military-industrial-corporate-consulting complex. This is a novel for our time, y'all.

Brock Wharton is a consultant for Cambridge Consulting Group (CCG) in Houston, a thirty-something Master of the Universe in training. He’s a former UT football star, possessor of a Harvard Business School MBA, and married to a South Texas ranching heiress who is expecting their firstborn. Wharton is fielding prospective CCG junior consultants when Mike Fink arrives for his interview.

Fink is emphatically not the CCG type; he’s “a redneck admiral at a regatta”—his suit is off-the-rack, his physique is a “flawed build that none of the South Texas ranching families would ever breed,”—he’s not even tall! Fink is a ten-year veteran of the U.S. Army Special Forces, and CCG’s managing directors have decided that his “distinct bio and fiery personality” will lend “authenticity” and allow CCG to better understand the “very American issues” of their newer clients. Look out, Dr. Pepper.

Wharton and Fink abhor each other at first sight, and class fireworks ensue as two competing and equally flawed theories of masculinity and America go to war. Beware the military-industrial-corporate-consulting complex.

Freedman’s two main characters are sharply drawn, though they begin as caricatures. Wharton, “who had conducted a life cultivating a resume,” denigrates veterans at every opportunity; he is an arrogant, sexist, casually racist, xenophobic, homophobic, entitled nitwit who is easy to hate. Fink is the populist every-man, with his common sense and common touch, to whom corporate boardrooms condescend but trot out on the Fourth of July (Thank you for your service!), who are currently enjoying a cyclical (cynical?) popularity.

Both men shed their respective costumes in the end, yet Wharton is the man allowed the greater development; he’s the one we identify with and ultimately root for—perhaps because his pathology is greater. Freedman does a great job with the gradual transformation.

Freedman is a Master of the Ironic Metaphor. “[The job applicant] was an image cut from the Brock Wharton Catalog for out-of-the-box thinkers.” He overdoes it occasionally, and penis size and the figurative presence or absence of testicles is a recurrent concern.

The narrative is told in a third-person limited point-of-view and is generally fast paced. The middle third lags, though it does include a hilarious set-piece at a NED Talk where attendees are encouraged to “swing away” and “lean forward.” The final third, in which we get an on-the-ground lesson in Middle East history, generally, and our invasion of Iraq, in particular, recovers from the second and surpasses the first, getting the epilogue just right.

“The hubris of Fink to believe his street smarts and dirty tricks would triumph over a lifetime of doing everything right,” Wharton thinks (emphasis added). And there it is—hubris on all sides and differing criteria of what is “right.” What and who qualifies as all-American? Winning a zero-sum game should not be one of the definitions. King of the Mississippi is a novel for our time.