Review: WHERE WE COME FROM by Oscar Cásares 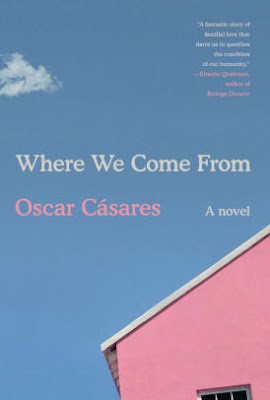 I reviewed Where We Come From (Alfred A. Knopf) by Oscar Cásares for Lone Star Literary Life. This quiet, nuanced drama reflects everyday occurrences in the liminal spaces of the borderlands.

We all have rules under which we are expected to operate. Those rules are different, though, depending upon what space we occupy, and those spaces are geographical, psychological, sociological, economic—no end to the variations impacting our options, que no?

Daniel has rules, and those rules are different in Brownsville than in Veracruz. In Brownsville there’s do not come out in the day, do not open the door to anyone, do not be looking out the window, do not be making any noises, do not turn on the air conditioner, do not, no matter what, let anyone see you.

Daniel is hiding in the little pink house in Nina’s backyard. He is twelve years old, from Veracruz, on his way north to reunite with his father in Chicago. The discovery of (probably not) the last mass grave was the last straw.

Orly has rules, and those rules are different in Brownsville than in Houston. In Brownsville there’s no kicking the ball against the side of the house, have respect (this isn’t Houston), always pray before eating, eat all your food (this isn’t Luby’s), stay away from the canal, no computers at the kitchen table (this isn’t Houston), no playing with the dog, La Bronca. The dog’s “chain looks short, but it always turns out to be a little longer than people think.”

Life will bite you; mind the chain.

Orly is visiting his godmother, Nina, in Brownsville for three weeks during summer vacation. Orly is twelve and lives in Houston with his father, older brother, and iPad. Real estate agents in his part of town extol the media room, the wine cellar, the library (no trapdoor). The consensus in his immediate family is that he’s soft, twelve going on nine. His mother died last year and he’s a sensitive child—the counseling, the meds, the vitamins, no junk food—maybe the Valley will toughen him up a little.

Nina is a retired teacher living in her hometown, lonely and frustrated, the default caretaker of her ninety-four-year-old mother. Rumalda crosses the bridge from Matamoros each Friday to clean Nina’s house. One day she asks un favor: Will Nina allow Rumalda’s daughter and granddaughter to hide in the little pink house in the backyard, just for a couple of days, until the next leg of their journey north can begin? Nina’s decision to help Rumalda sets in motion a series of events that will have profound effects on many lives.

There might be more friends who need favors, now that we know where you live …
You called my house to threaten me?
No, señora, I only called to tell you what’s going to happen next.

Where We Come From is the third book and second novel from Brownsville native and Austin professor Oscar Cásares. His first book, a collection of short stories called Brownsville, was named a Notable Book of 2004 by the American Library Association. His first novel, Amigoland, was chosen for the Austin Mayor’s Book Club. We’ve waited ten years for the next book from Cásares, and Where We Come From is a worthy and timely progression.

Immigrants, undocumented, illegals, aliens, shadows “… weren’t exactly slurs but weren’t exactly not slurs either and floated somewhere in between irreverent and offensive, depending on how closely you were willing to listen” los mojados, los pollos, las cucarachas.

Where We Come From is not a dramatic story in the way of action scenes, thrills and chills, or edge-of-your-seat suspense. Instead this quiet, nuanced drama reflects everyday occurrences in the liminal spaces between the Rio Grande and the inland Border Patrol checkpoints strung along the river’s course from El Paso to the Gulf of Mexico. The story of Daniel is at once personal and impersonal.

The fact that his story isn’t exceptional is what makes it exceptional. Though evenly and quickly paced, it sometimes seems as if not much is happening, but this novel is suffused with boredom and menace—twins of a fugitive existence, punctuated by moments of pure terror. This is what passes for normal.

Cásares relates his story in alternating third-person narrations interspersed with vignettes of immigrants. The bulk of the story comes from Nina and Orly; scattered throughout the novel we also hear from Juan Pablo in Fort Worth who waits for his wife and daughter, Carlos from Honduras whose son died in the back of a tractor-trailer, Odilia Hernández from Guatemala who died of heatstroke in the scrubland, Felipe from El Salvador who practices English recitation of the breakfast menu at a San Francisco hotel. The story of the Americas does not mean just the United States, to paraphrase Orly’s history teacher, Mr. Domínguez (also from Veracruz and whose work visa has expired).

Cásares’s characters are finely wrought, the adults sharp and distinct, the boys a little fuzzy around the edges, not done developing. Cásares is adept at channeling the pubescent boy he used to be, an age when you mistakenly assume that you are powerful enough to affect the wider world around you, before you discover that you’re not that important. Which is scarier?

I was steadily drawn into Where We Come From by Cásares’s skillful reeling of the line. When it seems he’s in danger of sentimentality, he pulls back just in time. He doesn’t flinch from the ugliness, neither does he hit you over the head with it. Cásares is making a bid for our humanity, but he isn’t peddling fairy tales. Even so, the end(?), which is pitch-perfect, gave me goosebumps and left me nodding, with a small smile on my face.