Review: SPYING ON THE SOUTH by Tony Horwitz 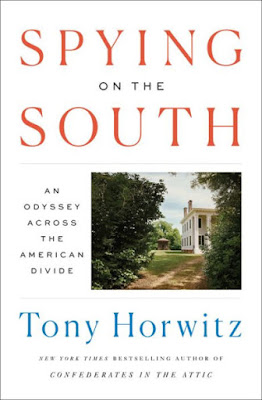 I reviewed Spying on the South: An Odyssey Across the American Divide (Penguin Press) by NYT-bestselling author and Pulitzer-winning journalist Tony Horwitz, who's been following Frederick Law Olmsted about, for Lone Star Literary Life. Horwitz's immersive journalism holds up a mirror reflecting how our original sins are still with us.

Halloween night found Tony Horwitz in a Grafton, West Virginia, bar with a woman costumed as a member of the Butcher Babies, a heavy metal band. She eyes his work boots, plaid shirt, horn-rimmed glasses, and Carhartt jacket with the notebook and pencil in one pocket. “Let me guess,” she said in an exaggerated drawl. “Yankee boy, spyin’ on us hillbillies?”

In 1854, Frederick Law Olmsted, writing as “Yeoman” on assignment for a brand-new outfit called the New-York Daily Times, set out on a journey across the American South, exploring the phenomenon of “G.T.T.”—Gone to Texas—in the pivotal years just before secession and civil war, when anti-immigrant fervor was on the rise and the “native” Protestants claimed to be besieged. Olmsted’s purpose was to seek “reliable understanding of the sentiments and hopes & fears” of the South. He wanted to gather the facts to counter the diatribes and epithets flying from both sides. Sounds familiar: a divided nation, each faction convinced of its righteousness and the moral and intellectual bankruptcy of the other.

Horwitz thought it sounded familiar, so he set off in Olmsted’s footsteps. Alternating the narrative between Olmsted’s day and his own, Horwitz traveled by Amtrak, rental Kia, coal barge, steamboat, foot, and mule from Cumberland, Maryland, to Eagle Pass, Texas, to see what he could learn about our current state of affairs.

One of the most interesting theories Horwitz explores is the feudal region that sported an aristocracy now supports an authoritarian, if not monarchical, president. This goes hand-in-glove with a rejection of expertise and science, which Horwitz had thought “an appendix of the American mind: a vestigial organ.” As one Louisiana preacher wrote in a letter to the editor in the early 2000s, “Learning for the sake of learning is egg head, intellectual elitism.”

Horwitz crossed the Sabine on El Camino Real, expressing confusion behind the Pine Curtain, where certain towns which shall remain nameless still refer to “the Quarters,” that East Texas wasn’t western at all. Something he will learn on his way to the Rio Grande is that there are many Texases. He visits the holy ground of San Jacinto “amidst a petrochemical Mordor” and experiences the High Holy Days at the Alamo, Día de los Muertos in Eagle Pass, and mule trekking around Sisterdale which ended in a concussion.

Horwitz did enjoy the surface manners the South tends to display toward strangers. He was taken with the friendliness of Cajuns whom, when he told them they’d been described to Olmsted as “habitually gay and careless, as well as kind-hearted, hospitable, and dissolute,” agreed that was pretty accurate. Horwitz was energized by the service at Franklin Avenue Baptist in New Orleans where he became “a parody of a white guy in a black church, clapping out of unison and jerking like a headless chicken.” He was viscerally disturbed by the plantation tours and the description of a lecture about the Underground Railroad as “fun and entertaining.” I’ve traveled in places the State Department would rather I not and which inspire my mother to email articles about bombs to me, but the scariest place I’ve ever been is Mississippi.

If you’ve been paying attention, then you won’t find news in Spying on the South. Like Olmsted, Horwitz began this project hoping that Americans could “listen to each other and air their differences in a rational and coolheaded fashion.” He doesn’t say definitively whether that hope survived the journey. Olmsted’s hope did not. Horwitz’s form of interactive and immersive journalism, while mercifully light on judgmental conclusions and personal opinions, holds up a mirror reflecting how our original sins are still with us.

“Bottom line?” Dave from Goliad finally blurts, “The government won’t let us do whatever the hell it is we want to do. That’s it.” Sounds like anarchy to me