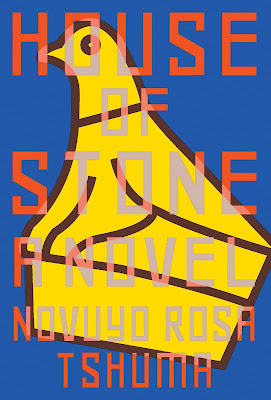 I reviewed House of Stone: A Novel (W.W. Norton and Company) by Houston's Novuyo Rosa Tshuma for Lone Star Literary Life. "A work of remarkable imagination, House of Stone is quickly and evenly paced until it begins coursing toward the denouement, flinging jaw-dropping twists amidst the factional, fractional, bloody birth of Zimbabwe, with mordant wit and keen characterization."

“Always, you must be looking back over your shoulder, to see what history is busy plotting for your future."

Zamani is “a man on a mission … to remake the past, and a wish to fashion all that has been into being and becoming.” He is a border in the home of Abednego and Agnes Mlambo in Bulawayo, Zimbabwe. Unbeknownst to the Mlambos, Zamani grew up in the house they now occupy, his childhood marred by secrets which were followed by revelations that threaten to unhinge his unstable personality. Zamani sees his chance to ingratiate himself with the couple when their son, Bukhosi, goes missing. Zamani assists in the searches for the teenage Bukhosi, and when Abednego refers to him as his “surrogate son” it is the “fruit of a long labor.” As Zamani plies Abednego with Johnnie Walker Blue and Agnes with sympathy, he pries their family histories from them and discovers that his appropriation of a new family hasn’t corrected his history or acquired for him a future, but instead has anchored him in, and allowed a fuller expression of, exactly that which he wished to deny and destroy.

House of Stone is the debut novel of Houston’s (by way of Zimbabwe) Novuyo Rosa Tshuma, whose short fiction collection, Shadows, won the 2014 Herman Charles Bosman Prize for the best literary work in English. A work of remarkable imagination, House of Stone is quickly and evenly paced until it begins coursing toward the denouement, flinging jaw-dropping twists amidst the factional, fractional, bloody birth of Zimbabwe, with mordant wit and keen characterization.

Who gets to tell whose story? House of Stone is told in Zamani’s first-person narration, but he is envious, manipulative, cruel, and ambitious, which begs the question: Is Zamani a reliable narrator? How can we trust Abednego’s account since he’s an alcoholic? Or Agnes’s version because she’s having visions from the Holy Ghost? The government issues an official version, but “those who know [the truth] are the kind of inerudite folk who, aside from being asked to pose for Red Cross and WHO newsletter photos, aren’t thought to possess that much-needed epistemological savoir faire.”

One person’s freedom fighter is another person’s terrorist. Would-be revolutionaries discover the bourgeois nature of their idealism when confronted with the genuine article. “There’s no such thing as truth … truth is optics. And there are so many options out there.” Is anyone to be trusted? How about you? Can you be trusted? Who among us is a reliable narrator?

The cadences of Tshuma’s prose are most assertive when she’s toing and froing in time, often from one paragraph to the next, the singsong give-and-take between the “ballsy exploits of Death” and Zamani’s “arti-farce.” Tshuma’s appreciation of mischief and her delight in language is evident. This account of Bukhosi’s birth in the bush, attended by a village woman and the sudden appearance of a lion, is a prime example:

“...my surrogate father tried to scream but couldn’t find his voice, my inamorata found her voice and screamed, the woman bared her teeth and barked, the beast bared its gums and snarled, the baby was coming, the Khoi San woman was hissing, Thandi was groaning, the lion was growling, she spread her legs, it licked its nose, she fisted her hands, it shook its mane, she began to cry, and off it sauntered.”

Tshuma presents us with a history lesson in the form of these individual lives, demonstrating the folly of denying that the personal is political. Following personal revolutions into political corruptions, Tshuma juxtaposes war narratives with the real thing, warning of the vile, dangerous mixture of religion and nationalism, as well as the risks of nostalgia, that siren song of a glorious, illusory past (“Make Rhodesia Great Again!”) which claims the powers of myth when a people cannot imagine any future they could want for themselves.

After all of this, we feel Tshuma’s steadfast compassion. We feel her hopeful ambition for her characters as they do what they think they must in the chaos and brutality of our darkest endeavors and attempt to rewrite history, re-inventing themselves in the aftermaths.