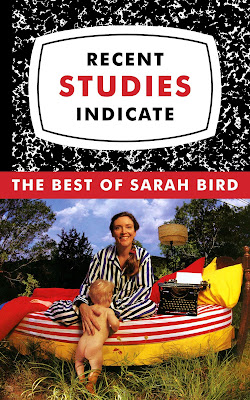 I reviewed Recent Studies Indicate: The Best of Sarah Bird (University of Texas Press) by Sarah Bird for Lone Star Literary Life! This collection should be gifted to all the daughters everywhere.

It’s often tricky to be a woman and a Texan. Sarah Bird, who frequently addresses the endless push-pull of being a woman in the Lone Star State, will make you glad to be both—simultaneously.

Recent Studies Indicate: The Best of Sarah Bird is the second book of nonfiction from Bird, following A Love Letter to Texas Women (UT Press, 2016), and her first anthology, covering four decades of work. The oldest piece, “A Question of Gender,” is a before-its-time profile of a transgender woman living in Austin written for the Austin Sun in 1976; the newest is “Paisano,” a grateful and celebratory paean to the Dobie-Paisano Fellowship retreat, written for Texas Highways in November of 2018.

In between, divided into four parts—“Womanhood: The Secret Delta,” “Texas: So Many Ways For a Girl to Lose Her Virginity,” “Motherhood: Two Seconds After the Stick Turns Pink,” and “Writing: Use It In Your Work,”—are columns, essays, articles, and opinion pieces published by disparate outlets, from Modern Bride and Good Housekeeping to Texas Co-op Power and the Alcalde, speeches, including one for Annie’s List in the wake of the 2016 presidential election (“…we Texas women, well, we just shrugged and said, “Been there. Done that. Got the T-shirt and the intravaginal ultrasound to prove it”), as well as a turn on the Moth Radio Hour.

The cover reflects Bird’s trademark mix of ironic-yet-earnest wit, the top half recalling a composition notebook while the bottom half features Bird in pajamas perched on a bed with a typewriter and a naked baby, red, white, and blue stripes suggesting a disjointed flag, the whole shebang afloat in Texas Hill Country live oaks and wildflowers. The title is a reference to those innumerable studies that innumerate everything we’re doing wrong, particularly in parenting, turning the conventional wisdom on its head annually (“if only I’d put a goat in the bassinet with my baby, he probably wouldn’t have an ear infection right now”).

In the introduction Bird explains that she grew up a shy child with two competing desires: never to speak with anyone outside her family and to quiz every stranger she encountered. What to do? Writing: essays, “province of the muttering malcontent, her head full of the counternarratives and snappy comebacks she is too shy to give voice to,” and journalism, “specialty of the introvert who has learned to compensate, who uses her notepad to wedge her way into the galaxy of worlds that first intrigue and then obsess her.” Bird outlines the trajectory of her writing career beginning with pulp fiction à la True Confessions (it was that or law school) and genre (“John Ray”) romance to freelance magazine writing, a special sort of hell wherein “magazine editors are like bad boyfriends—as long as you need them, they don’t want you,” and yet she persisted to become a best-selling, award-wining novelist.

Recent Studies Indicate finds Bird go-go dancing in Japan for two weeks (NOT in a cage, she assures us), moving to Austin for a boyfriend (“hot as lava”) who soon left her for Scientology, then discovering “the life in Austin [she] was meant to have … on the day [she] found Lynda Bird’s wedding cake in the LBJ Library.”

Bird relates adventures in highlighting golden tresses faded to the color of “garden mulch” (reminding me of a mishap of my own ending in a shade resembling lemon chiffon), Meat Loaf and screenwriting, going door-to-door with Jehovah’s Witnesses, Austin real estate, the sport of Texas billionaires—boar-hunting (“I don’t know what lowly millionaires hunt—nutria, probably”), and a case of mistaken identity involving Ambien at the Texas Book Festival.

There are lessons in meteorology, the history of progressive women in Texas politics, Catholic-school sex education (“our bodies were temples of the Holy Ghost, and … we could expect some major renovations in the temple to begin shortly”), the futility of prohibiting our sons playing with toy guns because they will create them from materials at hand, as my sons did with their soccer and ancient Egypt Lego sets, and appreciating your mother because of her six engagement rings you found in a trunk in the attic, not despite it.

Recent Studies Indicate is a treasure chest brimming with Bird’s distinctive voice: bold, thought-provoking, stitch-in-your-side funny, acerbic when called for, and, in the end, full of joy.