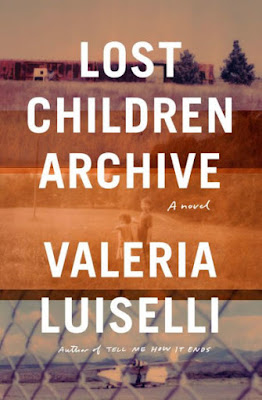 I reviewed Lost Children Archive (Alfred A. Knopf) by Valeria Luiselli for Lone Star Lit. This is a mixed review; the book is well worth deciding for yourself. I'd appreciate any thoughts y'all may have if you've read the book.

A family — a man and a woman, both documentarians working with sound (“We accumulated hours of tape of people speaking, telling stories, pausing, telling lies, praying, hesitating, confessing, breathing.”), and a boy, ten, and a girl, five — leave their New York apartment on a cross-country road trip. The man is heading for a new project about the last Apaches; the woman, who has been translating for a friend whose two children have crossed the Southern border on foot and have been detained by the Border Patrol, planning to make a documentary about the deportation of children. As the family makes their way across the country, stress fractures in the marriage begin to fissure, the car radio delivers worsening news about lost children, and the life of this family becomes as transitory, as impermanent, as that of any migrant.

Lost Children Archive: A Novel is the newest work and third novel from Valeria Luiselli, who is perhaps most well known for her second novel, The Story of My Teeth, which was named a best book of 2015 by almost everyone and was nominated for the Book Critics Circle Award in Fiction. She is the winner of two Los Angeles Times Book Prizes and an American Book Award; has twice been nominated for the National Book Critics Circle Award and the Kirkus Prize; and named a National Book Foundation “5 Under 35” honoree. As befits this pedigree, Lost Children Archive is original, startling, and frequently lyrical; it is also confounding, meandering, and frequently oppressive.

The book begins with the woman’s first-person narrative. She, as well as the other family members, remain nameless throughout. She met her husband when neither of them was doing work of their first choosing; how does that impact who they are together when they return to first choices? The woman suspects this trip is going to end their time together as a family and her anxiety is palpable. Her insecurity about her future sets her emotionally adrift and we flounder with her. This is where the oppression comes in — we are trapped in her mind with her.

The woman and the children are deftly drawn; locked in her deteriorating mindset, we get to know her well, and the children’s dialogue and thought processes are spot-on. Every parent of a small child will register the truth of these scenes. The man remains a blank slate, unknowable to the woman and so to us.

Luiselli is brilliant, a rare talent, but I think she may’ve taken a step too far since she felt it necessary to include notes on sources and works cited in order to explain the unusual structure of the book and how those works (elegies that allude to Ezra Pound which is an “allusion” to the Odyssey) function as “intralinear markers” to other voices from the past. The reader should be able to grasp what an author has done without explanation. This left me frequently impressed but unengaged. During the road trip, the woman walks in on a book club meeting at a bookstore. She thinks that it sounds like a graduate seminar, not a book club, and she doesn’t understand what they’re saying. Well, yes.

Halfway through the book, as my attention began to wander, there’s a change in narrator as the boy relates the trip from his perspective and then takes over the story. This is just what was needed and yet is wholly unexpected. I was riveted for a time by the fresh voice. The boy’s narrative is an act of love and generosity.

Lost Children Archive is a beautiful physical specimen, its jacket rendered in desert colors, the pages decorated with the eerie Polaroid photographs taken by the boy during the road trip as he begins his own attempt at archiving. Luiselli revels in language and so do we. The children, crawling into bed, “puppying around” as they arrange themselves to sleep. She describes the boy’s first successful photograph as not being of the gas pump that is in the photo, but as a record of the time the boy figured out how to use the camera. You see?

Luiselli deals with important questions as the woman begins to doubt her work and the documentary form itself. What use a documentary if it produces no tangible effect? Is the act of witnessing, the fact of a witness, necessary if that witness is powerless? Do the lives of these children become media fodder, a form of entertainment? There but for the grace of God and all that.

I do not read beforehand about books I’m going to review; it’s been difficult ducking Lost Children Archive since it appeared on shelves in February. I did see the headline of Francisco Goldman’s piece on this novel for Lithub, calling Lost Children Archive “a novel for our time.” That may be so, for it leaves me restless and profoundly unsettled.

Posted by Texas Book Lover at 8:51 AM