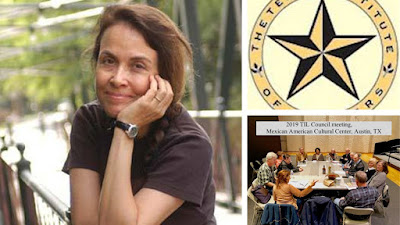 "We are very proud of the great diversity of exceptional talents in this year’s honorees,” said TIL President Carmen Tafolla. “These seventeen exemplars of literary innovation span the creative gamut from stage plays to song lyrics and from history to poetry, fiction, journalism, children’s works, and filmmaking. The Institute has again picked the very finest representatives of what it means to be outstanding, productive, and dynamically engaged in the advancement of the letters."

The TIL has chosen Naomi Shihab Nye as the winner of the prestigious Lon Tinkle Award for Lifetime Achievement, the highest honor given by the TIL. The award will be presented to Nye at the TIL’s annual meeting and banquet.

The next annual meeting and awards banquet will be held at Casa De Palmas in McAllen, Texas on April 26-27, 2019. The banquet is open to the public; tickets may be purchased at the TIL website.

The Texas Institute of Letters (TIL) is a distinguished honor society founded in 1936 to celebrate Texas literature and recognize distinctive literary achievement. The TIL’s membership consists of the state’s most respected writers – including winners of the Pulitzer Prize, National Book Award, Academy Award, Tony Award, Americas Award, International Latino Book Award, and the MacArthur “Genius” grant. Membership is based on literary accomplishments and is granted only though an election by existing members.

Posted by Texas Book Lover at 9:04 AM