Review: THE WEIGHT OF A PIANO by Chris Cander 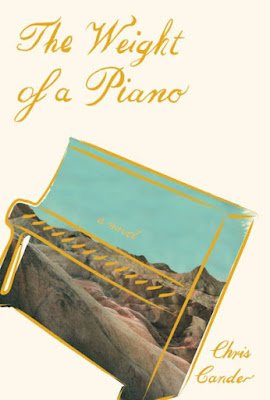 I reviewed The Weight of a Piano: A Novel (Alfred A. Knopf) by Houston's Chris Cander for Lone Star Literary Life. "Cander’s The Weight of a Piano showcases her development as a powerful storyteller, reminding me of Accordion Crimes (Scribner, 1997) by the great Annie Proulx. Steadily, warily, the two halves of this story move toward each other, and what follows is a tale of the paradoxical power of art — the duality that transfigures, enslaving some and setting others free."

Julius Blüthner, a German piano maker in the late nineteenth and early twentieth centuries, was a legend in his time. He would take the train from Leipzig to the mountains of Romania to personally choose the spruce trees which would become, after a process involving many steps and many years, a piano. One of the Blüthner factory’s rare instruments, which would “open up and gather into itself a unique history,” is a main character in Chris Cander’s latest novel, The Weight of a Piano.

The story begins with the birth of the piano and then leaps across time and space, first to Bakersfield, California, in 2012, where auto mechanic Clara Lundy is a twenty-six-year-old orphan, trying not to want anything because life has taught her that if she wants it too badly, she cannot keep it; then to Zagorsk, USSR, in 1962, where eight-year-old Ekaterina “Katya” Dmitrievna is kept awake at night by a piano-playing neighbor, an old German man who’d been blinded “by either shrapnel or guilt.”

Katya inherits an antique, shining ebony Blüthner upright piano from her neighbor; Clara’s father, he of the loud silences (“Hush, they said. I’m busy or Maybe later or I forgot.”), gifts her a Blüthner for her twelfth birthday. Katya’s piano is lost in the complicated immigration to America; Clara’s piano is a “paperweight, keeping what was left of her childhood memories from floating away.” Having never learned to play, and breaking her hand maneuvering the 564-pound paperweight up a flight of stairs during her latest move, Clara posts the Blüthner for sale. Needled by second and third thoughts, Clara tries to remove the sale notice but too late: a photographer in New York has bought it.

The Weight of a Piano is Chris Cander’s third novel. A work of literary fiction that spans decades and continents, Cander’s latest offering is an original, creative tackling of the essentially solitary human condition; the effort required of women to claim full personhood (I love you now change); and the frightening vulnerability necessary to connect with another, defiant in the face of the transitory nature of all things.

Cander’s women are each quite different from one another. While I appreciated the younger Katya, bemused and curious to see what she’d do next, I grew impatient with Clara’s (altogether understandable) pre-emptive strikes (“self-sufficient and self-contained, reliable instead of reliant”) and skittishness, shying like a wild thing from perceived threats to her jealously guarded independence. The two women’s paths cross in myriad ways, diverging in apposition; as Katya ages, she seems to diminish; as Clara ages she becomes bolder, more decisive.

There are a handful of slips in The Weight of a Piano. “His eyes glazed with animal desire” is unworthy of Cander. Granted, sex is hard to write well and it’s where the clichés reliably appear—not surprising but a touch disappointing. And why print an entire letter in Cyrillic?

Imagery such as this makes up for the slips: “This amplified tension between [Clara’s] parents so dense and sticky, always came and went, and now it was there again, like a spider web that had been spun in the night.” The stark extremity of Death Valley serves as inspired metaphor, providing a backdrop supremely indifferent to the human dramas playing out — all sorts of things are dying out there.

The piano tries to please — it has abandonment issues, too. “Oh, how hard it had tried to produce the right sounds, grateful as it was to finally have been asked to once again.” The denouement unexpectedly features the Blüthner’s point of view — compelling and, oddly, more affecting than the people. “It felt as though it were twice its actual size, a burden to itself and others … 564 pounds plus the invisible emotional and musical heft.” The piano is burdened by the hopes, dreams, disappointments, and griefs of its humans. “That’s not music. Let me go.”

Cander’s The Weight of a Piano showcases her development as a powerful storyteller, reminding me of Accordion Crimes (Scribner, 1997) by the great Annie Proulx. Steadily, warily, the two halves of this story move toward each other, and what follows is a tale of the paradoxical power of art — the duality that transfigures, enslaving some and setting others free.