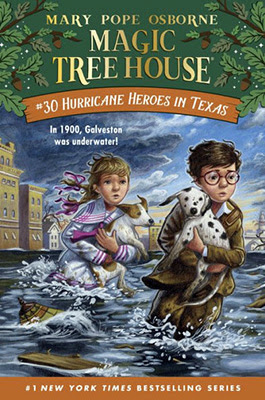 
The place you must go
On this late summer day
Is an island in Texas
Between Gulf and bay.

“We’re here to help!”
Is what you must say.
“Seek high ground now!
Do not delay!”

For those in the dark,
Adrift and astray,
A single bright star
Can show them the way.

Learn from a hero
Who is humble and brave,
Who welcomes the hundreds
Arriving on waves.

Mary Pope Osborne’s beloved Jack and Annie return to Texas, landing in a backyard oak tree in Galveston on September 8, 1900, just in time for the Great Galveston Hurricane, the deadliest natural disaster in the history of the country.

Hurricane Heroes in Texas is the thirtieth installment in the mega-bestselling Magic Tree House series by Mary Pope Osborne. In a “Dear Reader” note at the beginning of Hurricane Heroes in Texas, Osborne notes that she began writing a book about the worst hurricane to strike the United States in the summer of 2017, just as Harvey, another devastating hurricane, bore down on the Texas coast.

The first Magic Tree House book, Dinosaurs Before Dark, was published in 1992, introducing Jack and Annie, a brother and sister who discover a magical tree house filled with books. (What else would a magical tree house be filled with?) The tree house spins Jack and Annie away on their first journey, an adventure in prehistoric times. For those unfamiliar with the series, each Magic Tree House tale begins with a prologue which succinctly summarizes the premise in two pages so that any child can begin with any volume.

Cues in the text, such as clothing and machinery, provide clues for kids to link historical time periods and places. Magic Tree House Fact Tracker Texas is the companion to Hurricane Heroes in Texas, which includes heroes of Hurricane Harvey. The first two Magic Tree House Fact Trackers appeared in 2000, co-written by Osborne and her husband, Will Osborne. These nonfiction compilations provide children a way to find out more about their favorite places, time periods, and subjects. The historical consultant for this adventure is Andrew J. Torget, a professor of history at the University of North Texas in Denton.

The series is recommended for ages six through nine. Though a few passages in Hurricane Heroes in Texas are genuinely scary, as they should be, and may alarm little ones, Jack and Annie are industrious, compassionate little MacGyvers who will also awe and inspire.

The Magic Tree House franchise includes a website where kids can continue the educational fun by going on more adventures with Jack and Annie. www.MagicTreeHouse.com

“To the tree house!”