Review: WHEN THE MEN WERE GONE by Marjorie Herrera Lewis 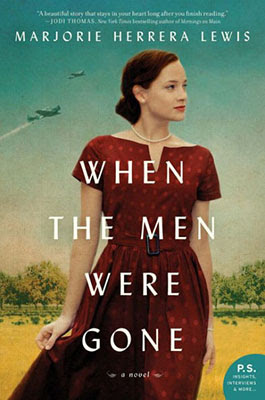 I reviewed When the Men Were Gone: A Novel (William Morrow Paperbacks) by sports journalist and football coach Marjorie Lewis for Lone Star Literary Life. "Y’all remember, when someone says women are too emotional due to the hormones, that testosterone is a hormone, too."

The year is 1944 and the Brownwood Lions may have to cancel their football season because their coach has just been killed in France. As World War II rages on, the men are either gone, in the process of leaving, or have returned from away, worse for wear or in a pine box. Tylene Wilson, who has learned football at her father’s knee, is the assistant principal of Brownwood High School. Worried that the senior boys — without the distraction, pomp, and circumstance of Texas high-school football — will quit school and enlist before their time, Wilson forms a committee and searches for a suitable man to recruit as the Lions’ football coach. When that plan comes to naught, Wilson decides to take on the role herself.

Though Wilson is a fixture of Brownwood society, intelligent, thoughtful, and respected, these qualities are not enough to insulate her from the disdain and disapproval of those she thought her friends and the threats and intimidation from those she thought might be thankful that someone — even a woman — has cared enough to risk friendships, finances, career potential, and even physical safety in order to preserve the town through the communal ritual and save the football season and the boys who would play it.

When the Men Were Gone: A Novel is debut historical fiction from Fort Worth’s Marjorie Herrera Lewis. Lewis is a former reporter for the Fort Worth Star-Telegram and the Dallas Morning News and beat writer covering the Dallas Cowboys—and now a member of the Texas Wesleyan University football coaching staff. Lewis has potential as a novelist. When the Men Were Gone is a good first effort, a quick read and a compelling story.

Lewis was inspired by the story of the real Tylene Wilson, an educator and principal for Brownwood ISD during World War II, who took on the role of head football coach at Daniel Baker College when their coach left for the war. Lewis’s research is evident, the details of the era abundant, and the atmosphere simultaneously tense and weary as President Roosevelt has converted the municipal airport into an army airfield and opened Camp Bowie a mere mile outside the Brownwood city limits, where troops train, prisoners of war are housed, and airplanes deliver the bodies of the killed in action.

Wilson’s first-person narrative takes place over the course of two weeks at the beginning of the school year, in the heat of a Texas August. Lewis’s style is a little AP, which is probably to be expected from a journalist in first fiction. The prose is simple and unaffected and is appropriate even for middle-graders. While Lewis provides Wilson with a complex, absorbing backstory dealing with childhood illness and loss, the frequent flashbacks can interrupt the narrative flow, and Wilson as an adult is improbably lacking flaws.

Lewis captures well the peculiar nature of a certain type of old-fashioned Texas “gentleman,” the kind that is all solicitous charm until the offered pedestal is declined and that charm morphs into insults and indignities. As an assistant principal, Wilson must assume responsibilities including academic issues, curriculum updates, textbook review, and the hiring and evaluation of staff. How can she possibly coach a game? Possibly because she is exhausted from everything else she does.

Wilson battles through boycotts by referees, illegal school-board meetings, threats of forfeit from opposing teams, and the doubts of her own team. The first time a player calls Wilson “coach” is sweetly touching. The climactic scenes are active, dramatic, and exciting, complete with a twist at the end.

Y’all remember, when someone says women are too emotional due to the hormones, that testosterone is a hormone, too.