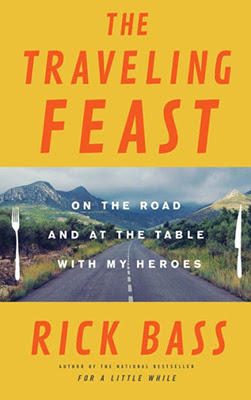 I reviewed The Traveling Feast: On the Road and at the Table with My Heroes (Little, Brown and Company) by Texas native Rick Bass for Lone Star Literary Life. "The Traveling Feast is part memoir, part lessons in craft, part naturalist activism, part cookbook, part travelogue, part recommended-reading list, and wholly a feast of language. As we prepare for our feasts this week, Bass’s new collection is art to be thankful for."

A soul-examining pilgrimage of the search for lessons in moving gracefully, maybe even joyfully, from middle-age into later years, The Traveling Feast: On the Road and at the Table with My Heroes is the new collection of essays from Rick Bass that will make you hungry for all things that nourish. The Traveling Feast is part memoir, part lessons in craft, part naturalist activism, part cookbook, part travelogue, part recommended-reading list, and wholly a feast of language. As we prepare for our feasts this week, Bass’s new collection is art to be thankful for.

Bass, born and raised in Texas, began his career as a petroleum geologist in Mississippi, spending his lunch hours and spare time writing and haunting the state’s famous bookstores. The author of thirty books, Bass won the Story Prize for his collection For a Little While and was a finalist for the National Book Critics Circle Award for his memoir Why I Came West. His work has appeared in The New Yorker, The Atlantic, Esquire, and The Paris Review (his first acceptance!), among many other publications, has been anthologized in The Best American Short Stories, won multiple O. Henry Awards and Pushcart Prizes, as well as NEA and Guggenheim fellowships. Bass left Mississippi for Montana’s remote Yaak Valley where he has lived for thirty years and where he is a founding board member of the Yaak Valley Forest Council.

The essays included in The Traveling Feast, with sixteen chapters each devoted to an individual writer, including Peter Matthiessen (RIP), Amy Hempel, Denis Johnson (RIP), and Terry Tempest Williams, who has been an inspiration and mentor to Bass in his work and how to live a meaningful life. Chapter titles include “Russell Chatham, the Painter, Recently Hospitalized, Emerges from Seven-Figure Debt and Alcoholism, Ready to Paint,” “Lorrie Moore, Fairy Godmother: The Road to the Corn Palace; or, the Trail of Ears,” and “Joyce Carol Oates, Badass.”

The Traveling Feast is suffused with the author’s self-deprecating, wry wit, such as the time Bass attempted to become Eudora Welty’s yardman just so he could breathe the same air. Sometimes it’s laugh-aloud hilarious, as when the frozen elk Bass was smuggling into Heathrow began to thaw and left a trail of blood down the concourse.

There are no ten-dollar words in this collection but the prose is not simple; it simply rings true in a stripped-down aesthetic that reminds me of Raymond Carver, who is a presence in these pages. Simultaneously, The Traveling Feast is profoundly personal, Bass’s feelings raw and on the surface, working through the possibilities for the remainder of his years after a devastating divorce (“There can be something even more sorrowful than ghosts, which is the separation of the living.”) has left him mired in doubt and melancholia, casting about for comfort and catalyst.

This is where Bass’s heroes come in. In a quest for sustenance and restoration, he decided to take a break from writing to travel the country (and in a couple of cases, Europe) to visit writers who shaped him and his work. Bass took along a select few of his most promising workshop students and together they created wonderful meals (soup of fresh-dug parsnips with tarragon, butter, garlic, and vermouth; balsamic-and-fig glaze for the quail; jalapeño potato gratin with sweet potatoes, cream, garlic, and sage; ginger chocolate cake with buttermilk, applesauce, vanilla, and cinnamon) for his heroes, forging human connections through the timeless ritual of breaking bread together. Bass seeks wisdom from those writers who were “around at my beginning” and needs reassurance and inspiration from “the sight, the proof, that in the greats this fire is never extinguished.”

Bass is painfully honest about himself, writing that “shy men [and] women cannot live among people, nor should they try.” This is where the remoteness of Montana wilderness enters the picture.

“When you are shy like this,” he continues, “you want to come closer but cannot bear to bring yourself in. When you are a million miles out … you’re free to just stand there and watch, and things that are ordinary to everyone else seem to your shy mind … beautiful. You feel like falling over on your back, upturned, like a turtle.”

Is there a better simile than that turtle? I think not.

Bass can make you blissfully drunk on language, contemplating how twenty-six letters can be arranged in such a way that both inspires and humbles, leaving you staring at the wall or into the middle distance, turning a phrase over and over again like a river rock to discover each contour while knowing with utter certainty that you’re going to overlook something in haste for the next treasure.

“Because I knew Denis [Johnson] to be a genius with his sentences and perceptions, I imagined he might not be wise that way with the rest of his life and with the allocations of his heart. But as with the best of meals, were fed what we needed, and strengthened.”