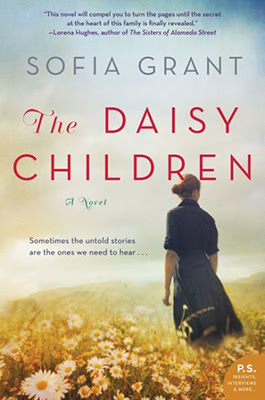 I reviewed The Daisy Children (William Morrow) by Sofia Grant (aka Sophie Littlefield) for Lone Star Literary Life. This first historical fiction from Grant/Littlefield "is a carefully and elegantly constructed exploration of a hundred years of dysfunctional family relationships, the nature of secrets, and the potential for healing."

Katie Garret is having a bad week — she’s been fired from her marketing design position; she’s failed to get pregnant this month, too; and she just accepted delivery of her husband Liam’s new $240 trousers. Then her mother, Georgina (a real piece of work, this one), calls to tell her that Grandma Margaret has died and Katie is named in the will. Katie, newly unemployed and un-enamored with her husband, decides to make the trip from Boston to rural East Texas, a kind of vacation from her real life. “She’d have a baby when she was meant to,” Katie thinks. “She’d get to New London and discover she’d inherited a fortune, or a pittance; she’d go to Dallas and bond with her mother or argue with her. All of it would be fine.”

But even after the mugging and the appearance of astonishing cousin Scarlett and being mistaken for a vagrant and then a burglar and uncovering the clues that gradually reveal generations of family secrets that echo loudly into the present, Katie is worrying about the wrong things. “The thing she really ought to be worrying about,” Grant writes, “was that Texas would seep into her pores and take root.”

The Daisy Children: A Novel is new fiction from Sofia Grant, whom y’all probably know better as Sophie Littlefield, author of more than two dozen books in many genres including YA, apocalyptic fiction, thriller, domestic suspense, and women’s fiction, this last being assigned to The Daisy Children metadata. This is unfairly reductive; what it should say is a carefully and elegantly constructed exploration of a hundred years of dysfunctional family relationships, the nature of secrets, and the potential for healing.

When Littlefield became interested in writing historical fiction, she became Grant, deciding a name change made sense in this departure from her previous work. The Daisy Children is inspired by the 1937 New London, Texas, school explosion, about which Grant read a nonfiction account and was touched and intrigued by the story of those who survived it. She began wondering how the community might have changed and adapted in the years that followed.

The third-person narration moves back and forth in time in alternating chapters, a four-dimensional story in which you can feel the puzzle pieces locking firmly into place. Part contemporary fiction, part historical, The Daisy Children is fast and evenly paced; the clues are well placed; and the many plot twists, both large and small, propel the action effectively.

Contemporaneously with the explosion, East Texas experienced an oil boom in the twentieth century that, for a while anyway, transformed the economy and introduced new class dynamics, which play an important part in both the daily functioning of the households and in the larger questions of chance, fate, and worthiness when tragedy strikes.

Grant’s women characters are distinctive personalities with complicated emotional lives, complex back stories, and rich details that reveal their essence. For example, Scarlett has a tattoo of monkeys — plastic monkeys from the Barrel of Monkeys game — “linked by their tails, frolic[king] across her collar bones … disappearing into her tank top at the armholes.” This tattoo tells you much of what you need to know of the essence of Scarlett.

The flaws of The Daisy Children are small: the men are not as vital or complex as the women; the speed of development of a new love interest strikes me as a false note, seemingly out of character for the couple as individuals. In comparison to its entertaining charm and engaging, sleight-of-hand technique for introducing some of life’s biggest questions, these flaws are insignificant.

Grant’s vibrant style is often humorous, sometimes drolly amusing (bereavement “sounded old-fashioned, like pinafore”), sometimes tongue-in-cheek, sometimes the equivalent of slapstick, sometimes arch and biting. The perfect blending of all of these is the child Margaret, a combination of Nellie Oleson and Harriet the Spy.

The waste of years and human potential is heartbreaking — all the lost opportunities to atone for, to forgive, to gather and in so doing create strength not possible alone, to be a family. Katie confronts a turning point, the proverbial fork in the road — who are you now? Who are you going to be?

Posted by Texas Book Lover at 8:35 AM