Review: THE MAN WHO WALKED BACKWARD by Ben Montgomery 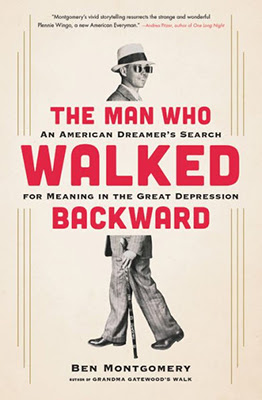 I reviewed The Man Who Walked Backward: An American Dreamer's Search for Meaning in the Great Depression (Little, Brown Spark) by reporter and Pulitzer Prize-finalist Ben Montgomery for Lone Star Literary Life. This is narrative nonfiction at its finest.

BIOGRAPHY/ ADVENTURE
Ben Montgomery
The Man Who Walked Backward: An American Dreamer’s Search for Meaning in the Great Depression

On April 15, 1931, Plennie Wingo, 36, of Abilene, Texas, donned a pin-striped suit, a tie, a fedora, and a pair of sunglasses specially fitted with side rear-view mirrors and set out to traverse the world walking backward. Wingo’s café, which fed and housed him and his wife and daughter during the Roaring Twenties, went belly-up as the country plunged into the darkness of what would become known as the Great Depression. Wingo’s arrest for serving alcohol during the folly of Prohibition didn’t help, either.

Wingo claimed to be trying to earn some money to provide for his family and maybe that was originally the impetus, but Wingo carried on with his stunt after none of his attempts to be sponsored — preferably by the Fort Worth Chamber of Commerce in return for global advertising in the form of a sandwich board, then maybe by a shoe manufacturer, then hopefully by a company that made rubber soles for footwear — panned out. Wingo financed his Grand Tour by selling postcards of himself facing backward (but who could discern that from a photograph?). Surprisingly, the postcard sales worked pretty well.

Oh, the places he went and the sights he saw! During his grand adventure, Wingo depended upon the kindness of strangers and was (usually) not disappointed. He walked 2,000 some-odd miles across sixteen states, from Fort Worth to Boston, where he got a berth, in return for his labor, on the Seattle Spirit (which would be torpedoed the very next year by a German submarine) headed for Hamburg, Germany. He ultimately made it as far as Istanbul, Turkey (where he had tea with Queen Maria of Yugoslavia), backward-walking.

Wingo encountered quarrelsome cops, jealous husbands, and “gypsies”; was thrown into not a few jail cells (“Things began to look bleak for Plennie around day seven in the Turkish jail”); and was deloused once. His return from Europe involved an Italian mystery man and a few suspicious trunks of he-claims-not-to-know-what.

Wingo also experienced the best of the species, people of all races and nationalities who became fast friends and provided a meal, a bed, fresh clothes, cash (a crowd of Romanians passed the hat), and, in one instance, an escort to the Czech border by a contingent of lumberjacks, to this peculiar American who inspired them against a backdrop of Al Capone’s soup kitchen, banks collapsing, dusty bowls, plagues of grasshoppers, MacArthur ordering the murder of the children of veterans camped out on the Potomac River, and the rise of something called the Nationalist Socialist Party in Germany.

The Man Who Walked Backward: An American Dreamer’s Search for Meaning in the Great Depression is Pulitzer Prize–nominated journalist Ben Montgomery’s third book of nonfiction and his second book about an unusual pedestrian. The Man Who Walked Backward is a richly textured, elegantly constructed cry against convention in a country which has battled between stultifying convention and “rugged individualism” since its earliest days.

Montgomery’s narrative is quick and even while incorporating asides into the flow. His personality permeates his writing and adds to the experience rather than distracting from it. Montgomery is fondly indulgent of Wingo though not adverse to gently but firmly calling him out on his self-serving justifications and disingenuous rationalizations with a sharp, clear-eyed wit — and a pun or two (no small feat) — when deemed necessary.

Fun fact: if you walk backward far enough, your legs appear as if your calves (“like ripe grapefruit”) have migrated to your shins. Imagine.

Another fun fact: “Walking backward around the world” in German is “Rückwärts rund um die welt.”

Montgomery has a gift for the well-turned phrase and for succinctly capturing the character of historical events and periods and how those events affect the character of individuals. Of the 1920s, Montgomery writes, “What followed [World War I] was optimism, and mass production, and the mass production of optimism.” The introduction of radio into homes birthed “a controversial new offense on family circles called a ‘commercial.’”

The author’s use of language is a joy. Environmental devastation caused by certain farming and mining practices leaves a debilitated landscape and human suffering as “a reminder of the toll of the taking.” That’s my new favorite phrase, the toll of the taking. Crossing the Atlantic, one of Wingo’s jobs was to squeegee the cabins but he was profoundly seasick and so his vomiting “erased considerably his squeegee productivity.” A disgusting image but a hilarious phrase followed by touching emotion: Wingo comes to a fork in the road in a Bavarian forest. The snowfall had finally stopped and sunlight was filtering through the dense branches causing the snow to sparkle. “[Wingo] stood for a long time, watching, listening, his breath visible, the full moon rising over the woods,” Montgomery writes. “[Wingo] had walked at least twelve miles in the wrong direction. He was happy to be lost.”

The epilogue is a neat compilation of updates on people and situations mentioned as context throughout The Man Who Walked Backward. Capone died from a heart attack in his mansion in Florida in 1947. Native Americans “refused to vanish, despite attempts to brainwash tens of thousands of Indian children in boot-camp boarding schools” and built casinos which finally recouped some of the money owed them by Anglos for stolen land. Americans raised a glass to the death of Prohibition. FDR refused to allow Charles Lindbergh to enlist in the army on account of Lindbergh being a Nazi.

And Plennie Wingo? It’s 1976 and he’s on “The Tonight Show” with Johnny Carson. Wingo’s world record for distance stands.

Narrative nonfiction is a form which allows for a broader picture of the subject, not just a portrait but a landscape showing where the subject fits in time and place, the influences of circumstances both large and small. An intriguing mix of biography and history, seasoned with dashes of science, sociology, and psychology, leavened with Montgomery’s sly wit, The Man Who Walked Backward is the best sort of narrative nonfiction, using the micro of Plennie Wingo’s journey to tell us something about the macro state of us in the 1930s. Indeed, in our love of spectacle and self-promotion, which has culminated in the election of a walking spectacle as president, we haven’t changed much.


“A man had come, and he would be remembered, and what more could he ask?”