Review: WHAT DO YOU DO WITH A VOICE LIKE THAT? THE STORY OF EXTRAORDINARY CONGRESSWOMAN BARBARA JORDAN by Chris Barton 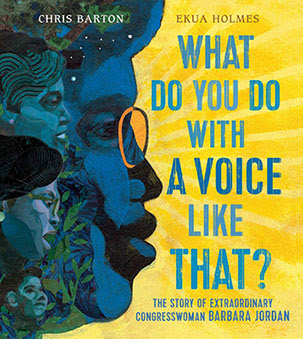 And here it is, y'all, Chris Barton's picture-book biography of the Honorable Barbara Jordan: What Do You Do with a Voice Like That? The Story of Extraordinary Congresswoman Barbara Jordan (Beach Lane Books), illustrated by Ekua Holmes. "I will pass this beautiful book along to my grandsons so they can learn, free of simple-minded jingoism, what it means to be a patriot."

What Do You Do with a Voice Like That? The Story of Extraordinary Congresswoman Barbara Jordan is the new picture book from Austinite Chris Barton, author of the best-selling Shark vs. Train, Sibert Honor–winning The Day-Glo Brothers, and Texas Bluebonnet Award Master List books The Amazing Age of John Roy Lynch (2016–17) and Whoosh!: Lonnie Johnson’s Super-Soaking Stream of Inventions (2017–18).

When I spoke with Barton a few weeks ago, he called Jordan “a true Texas hero” whose career in the Texas Senate, U.S. House of Representatives, and on the faculty of the LBJ School of Public Affairs “set a shining example of how to take a natural gift and put it to use for the benefit of one’s community, state, and nation.”

The phrase “What do you do with a voice like that?” is a refrain throughout the book.

“First you give that voice something to say.” Barton writes that Jordan began with reciting poetry in church, memorizing speeches for school, and entering — and winning — oratory contests. When an African American lawyer visited Jordan’s high school to speak to the students, Jordan found her calling.

“You give it more knowledge to work with.” Jordan graduated from college and law school.

“In 1960, America was not as free or as fair a place as it could be,” Barton writes. “Barbara believed that politics could change that.” One night when a scheduled speaker at a political event wasn’t able to attend, Jordan spoke instead. The audience was inspired and Jordan, finally, “knew just what to do with a voice like that.” She ran for office.

Listening to Jordan speak about President Nixon and Watergate from her position on the House judiciary committee in 1974 gives me chill bumps every time I hear it. Y’all remember, yes? “My faith in the Constitution is whole, it is complete, it is total. And I am not going to sit here and be an idle spectator to the diminution, the subversion, the destruction of the Constitution.”

As Barton writes, “The president, Barbara said, must go. The president went.” What a spectacular use of that voice in service to a nation.

Ekua Holmes is a fine artist and illustrator who lives not far from where Jordan attended law school at Boston University. Her debut picture book, Voice of Freedom: Fannie Lou Hamer, Spirit of the Civil Rights Movement, won multiple awards, including a Caldecott Medal. Holmes was influenced early on by what she saw as a lack of positive images of African Americans and believes that art can help right that wrong. In her collages, she layers newspaper, photos, fabric, and other materials, to create compositions saturated in color and infused with personality.

What Do You do with a Voice Like That? is recommended for ages four to eight, grades preschool through third. The concepts are sophisticated but in Barton’s hands understandable, engaging, and inspiring for youngsters. I will pass this beautiful book along to my grandsons so they can learn, free of simple-minded jingoism, what it means to be a patriot.