Review: AN OCEAN OF MINUTES by Thea Lim 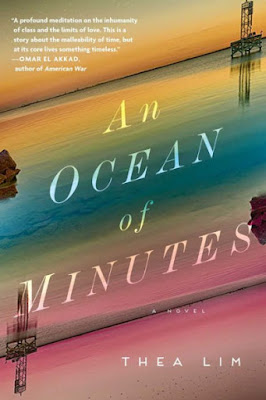 I reviewed An Ocean of Minutes: A Novel (Touchstone Books) by Thea Lim for Lone Star Literary Life. Lim is a graduate of the University of Houston - Creative Writing Program and a former editor at Gulf Coast Journal. "An Ocean of Minutes is an impressive debut about the privilege of autonomy, the duality of hope, and both the power and the limits of love."

Frank and Polly are falling in varying degrees of love. Winter is awfully cold in Buffalo, New York so the two take off on a lark for climes South, missing the interchange for New Orleans and washing up in Galveston. When the Centers for Disease Control (CDC) loses control of a virulent flu virus, the resulting pandemic traps Frank and Polly in Texas as the government attempts to contain the contagion.

When Frank falls ill without health insurance, forcing previously unthinkable choices, Polly signs on with the Rebuild America Time Travel Initiative to secure the treatment Frank needs. “There is no flu in 2002.” “Travel to the future and rebuild America.” She and Frank arrange a time and place to meet in the future when he is well again.

But Polly is rerouted and emerges into a dystopian future five years later than agreed, where the pandemic and attempts to protect against it have destroyed societal norms, rearranged international borders, deepened the chasm between socio-economic divisions, and nature is inexorably reclaiming the folly of human industry and infrastructure. Polly must try to find Frank while serving out her bond to TimeRaiser, the corporation that paid for her time travel and Frank’s healthcare.

An Ocean of Minutes: A Novel is the first book from Thea Lim, a graduate of the University of Houston’s renown creative writing program. Her work has appeared in The Southampton Review, The Guardian, Salon, and The Millions, among other outlets, and she is a former nonfiction editor at Gulf Coast: A Journal of Literature and Fine Arts. An Ocean of Minutes is an impressive debut about the privilege of autonomy, the duality of hope, and both the power and the limits of love.

Lim provides richly detailed families and backstories for Frank and Polly, both well developed and compelling characters. Third-person narrations trade points-of-view, moving back and forth through time, offering representative vignettes and instructive memories, clues to the story of Frank and Polly, which is sweet without being sappy and intimate without being awkward.

“Look at me. I’m not like them!” Polly insists, then she begins to cry from “shame that she had said such a thing, and out of fear that she had to.” Lim immerses us in Polly’s overwhelming powerlessness and makes us consider the nature of time and the dangerous delusions of nostalgia. “We’re getting the past back, but better. It will be the way we like to remember it instead of the way it was,” Polly’s boss tells her. “People will pay anything for that.”

The characters in An Ocean Minutes are well-meaning, ordinary people making desperate choices under extraordinary circumstances in an alien America. Technically, Lim’s work is classified as science fiction, but the only thing far-fetched about An Ocean of Minutes is the time travel.

Posted by Texas Book Lover at 9:01 AM