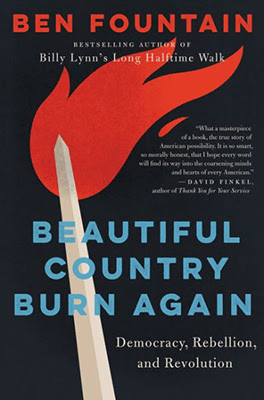 This is necessary reading. I reviewed Beautiful Country Burn Again: Democracy, Rebellion, and Revolution (Ecco Books) by Dallas's Ben Fountain for Lone Star Literary Life. "As disturbing and enraging as Fountain’s subject is, it’s a pleasure to read long-form journalism by a gifted fiction writer. I hope he does it again."

“Nautonomy: the asymmetrical production and distribution of life chances which limit and erode the possibilities of political participation.” —David Held, Democracy and the Global Order

Ben Fountain pulls no punches. “This wasn’t Democrats versus Republicans so much as the sad, psychotic, and vengeful in the national life producing a strange mutation,” he writes, “a creature comprised of degenerate political logic.”
Where were you when you heard the news? You remember, don’t you, whether you thought the news was fantastic or catastrophic? I do; I was somewhere over the Atlantic Ocean on a 787 bound for New Delhi. So, naturally, at 9 p.m. EST I began pestering the cabin crew for election news. The pilot resorted to announcing updates and when it was done, when the result was announced, I cried.
I write this review on the day Paul Manafort pleads guilty to conspiracy against the United States.
Beautiful Country Burn Again: Democracy, Rebellion, and Revolution is the first book of nonfiction from Ben Fountain, a former attorney, whose fiction is famous. You may not be familiar with Brief Encounters with Che Guevara, a collection of short stories which won the PEN/Hemingway Award in 2007, but you cannot have avoided Fountain’s novel, which won the National Book Critics Circle Award in 2013 and became a film directed by Ang Lee — Billy Lynn’s Long Halftime Walk.
“I was having feelings. They weren’t good feelings,” Fountain writes. “By Thanksgiving, 2015, these feelings had crystalized into a sense that something new and ugly was afoot in the land of the famously free.” So, The Guardian newspaper dispatched him to the campaign trail to “figure out what the hell was going on out there.” The result was a series of essays for the newspaper which eventually became Beautiful Country Burn Again.
Much more than a simple expansion of that series of essays, this book is a triumph of reporting — a synthesis of research, interviews, observation, experience, and analysis producing a vital mix of politics, economics, philosophy, sociology, psychology, and history. Fountain contextualizes the result with a “Book of Days,” preceding each chapter, which sets the global stage upon which the events of that chapter played themselves out.
Fountain explores and explains and distills into what he calls the “American anthropology,” which is basically this: If we believe freedom is a finite thing, then the perception of a loss of freedom necessarily means that someone else has gained more freedom by taking it from us, and the less freedom you have, the more likely you are to be exploited economically. Ergo, “the American anthropology, the two horns of a bloody dilemma on which the democratic experiment has balanced for 240 years,” Fountain writes. “Profit proportionate to freedom; plunder correlative to subjugation.” If the boot is on my neck now then it must have been removed from someone else’s neck.
“Twice in its history the United States has had to reinvent itself,” Fountain writes, “in order to survive as a plausibly genuine constitutional democracy.” Those instances were the Civil War and the Great Depression. In the first instance, “the land literally burned … either the country would be reinvented as a profoundly different social order — with a redistribution of freedom … a resetting of the values in the freedom-profits-plunder equation — or it would be broken in two.”
The Great Depression forced a second reckoning: FDR’s New Deal countered what Fountain describes as “the threat that unbridled industrial capitalism posed for democracy.” In other words, if you are owned by your employer, with no bargaining power and no safety net if you fall, you are a slave in “a new kind of bondage, a shell democracy that maintained the forms of political equality while abetting an economic system that denied the great mass of people meaningful agency over their lives.”
Fountain believes we are now faced with the choice of a third reinvention or the death of the American Dream, in essence a crisis point of existential threat no less pivotal than the two previous reinventions.
As Jon Meacham, historian and author of Destiny and Power: The American Odyssey of George Herbert Walker Bush (and many other books), says, “Sometimes it takes a novelist to capture a world gone mad, and it’s difficult to imagine a better match for our times than Ben Fountain.” Agreed. Fountain has examined the symptoms, analyzed the data, and offered a diagnosis of what ails us: “Fear is the herpes of American politics: the symptoms bloom and fade, but the virus never dies.” (Thanks for that image.)
If you’ve been paying attention, there is no new information in Beautiful Country Burn Again; if you haven’t been paying attention, then brace yourselves. Reminding me of Hunter S. Thompson without the ’ludes, Fountain writes in a colloquial style, telling unvarnished home-truths with an outraged, acerbic wit. He has a gift for getting at the essence of a thing, recognizing Trump as a combination of J.R. Ewing and Tony Soprano, his presidency a reality-TV program taken to its logical extreme.
Fountain conducts a consciousness-raising session and a deep-dive of a history lesson in electoral politics. He demonstrates cause and effect in clear, concise, and persuasive prose—no magic here. No one escapes; Fountain takes the Republicans to task as well as Democrats, closing Beautiful Country Burn Again in urgent tones with an inspiring moral case for what could be. Don’t skip the footnotes; they include authorial commentary, sometimes in French, as well as the citations.
The Fire Next Time, The Fire This Time, Beautiful Country Burn Again. Possibly the most chilling sentence in Fountain’s new book is, “This may be the most powerful medicine in politics, the leader who delivers a man to his natural self.” Is the result of the 2016 election a product of our natural selves? I do not want this to be who we are.
As disturbing and enraging as Fountain’s subject is, it’s a pleasure to read long-form journalism by a gifted fiction writer. I hope he does it again.
Originally published in Lone Star Literary Life.
Posted by Texas Book Lover at 12:00 AM