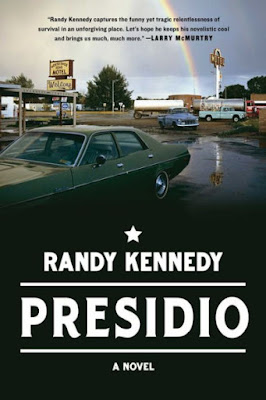 I reviewed Presidio: A Novel (Touchstone) by Texas Panhandle native Randy Kennedy for Lone Star Literary Life. This one got the nod from Larry McMurtry, a thing rarely seen.


“Later, in the glove box, the police found a folder of notes. It said: Notes for the police.”

Troy Alan Falconer hasn’t been home to the fictional Texas Panhandle town of New Cona in six years. Despite his trepidation, Troy returns, answering a summons from his younger brother, Harlan, whose wife, Bettie, has absconded with all the money he had in the world. The two set out to find Bettie, but the task veers awry when Troy steals a station wagon from a Tahoka grocery-store parking lot. Unbeknownst to the brothers, an eleven-year-old Mennonite girl named Martha is hiding in the back. When they discover her the next morning, Martha has an agenda of her own, demanding the brothers return her to her father in Juárez. An inadvertent kidnapping being degrees of magnitude worse than advertent grand theft auto, the three head for México by way of Presidio.

Presidio: A Novel is debut fiction from Randy Kennedy, who grew up in Plains on the Llano Estacado. Kennedy decamped for New York City, where he wrote for the New York Times for twenty-five years, first as a city reporter and then covering the art world. Kennedy’s prose about the large hold of small places, the people as weather-beaten as the landscape, grabs you and refuses to relinquish its grip. Original and enthralling, Presidio is American realism in the vein of John Steinbeck and Stephen Crane.

The first thing I saw when I unwrapped my copy of Presidio was a blurb by Larry McMurtry, sitting at the top of the cover like a crown. McMurtry frequently obliges his tetchy reputation. During a speech at a Fort Worth museum in 1981, in the first-person testimony of then–book editor of the Fort Worth Star-Telegram Larry Swindell, McMurtry “categorically put down Texas writing and Texas writers, dismissing them individually and collectively as having produced no literature of lasting value.” McMurtry charges sentimentality regarding myths of ourselves. We generally plead guilty, which is what makes his blurb of Kennedy’s first novel a surprise. So, expectations raised.

Troy, emotionally fragile, is a wild thing, all eyes and ears and reflexes. He woke one morning, a switch in his head having flipped sometime in the night, and decided to check out of conventional society, to embark on “the careful and highly precarious maintenance of a life almost completely purified of personal property,” never feeling better than when he’s on the move. The notes he left in the last stolen car list some of his favorites things, including stealing cars, a task in which “habit was [his] chief accomplice,” his “only adversaries dogs and insomniacs,” and motel rooms during hot afternoons smelling of “freon and anonymity.”

Troy’s narrative alternates between third person and those first-person notes, as well as back and forth in time, from formative vignettes to the current aborted search for Bettie turned run for the border. Troy’s dry humor and weary, paranoid voice claims stealing cars a way of life, “a calling that felt almost religious … I would have been its reverend, preaching my message of freedom through loss from my pulpit behind the dashboard.” This is when I had a conversion experience.

Rendering a sparse land in rich detail, Kennedy writes West Texas as James Lee Burke writes New Iberia. I live in the part of Texas Kennedy writes about, so I step out my front door into Kennedy’s landscape and it is spot-on, the land acting as a fourth main character.

Precise, economical word choices pack an emotional punch out of proportion to their brevity. When Troy visits his family’s cemetery plot he thinks that “all he ever felt in a cemetery was a sense of looking for something in the wrong place,” the dash after a birth date on a gravestone for a man not yet passed is a “cruel piece of punctuation standing in for a man’s whole life.”

Expectations met. Presidio is a modern tale of the Old West, of life on the shifting margins with grifters and drifters, a peculiarly American restlessness.