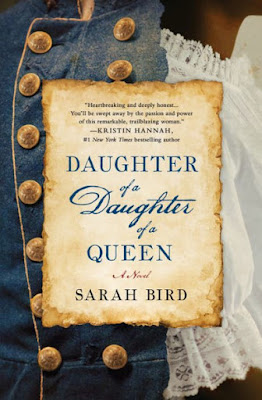 I reviewed Daughter of a Daughter of a Queen (St. Martin's Press) for Lone Star Literary Life. " Bird ... imagin[es] a singular voice, life, and love for a historical figure about which little is known. I fervently hope most of it could be true."


“Girls want marvelous adventures just as much as boys do.” —L. Frank Baum, author of The Wizard of Oz

“Here’s the first thing you should know about Miss Cathy Williams,” Sarah Bird writes. “I am the daughter of the daughter of a queen and my mama never let me forget it.”

Williams was born a captive prisoner of war — never a slave — on a Missouri tobacco farm. Her mother raised an intelligent, resilient, fierce warrior-woman, nurturing Williams with tales of an African grandmother who was a warrior-wife of the Leopard King.

In the waning days of the Civil War, Williams is plucked from the farm by Maj. Gen. Philip Henry Sheridan to be a helper for his cook. Traveling with and feeding the Army of the Potomac’s Cavalry Corps engenders a sense of purpose in Williams, and she sees joining the Buffalo Corps at the end of the Civil War as the only option for a life of independence and honor. Although the trials and tribulations of hiding her gender are many, myriad, and dangerous, Williams is lifted and transported by “that feeling of being part of something fine and strong and a whole lot bigger and more important than [she].”

Daughter of a Daughter of a Queen is new fiction from Austin’s Sarah Bird. She is the author of ten previous bestselling, critically acclaimed, and award-winning books: nine novels and one book of autobiographical essays titled A Love Letter to Texas Women. Bird has written for NY Times Sunday Magazine, Chicago Tribune, Salon, Texas Observer, and Texas Monthly, among other outlets.

She was also a screenwriter for ten years, working for Paramount, CBS, Warner Bros, National Geographic, ABC, TNT, and independent producers. In 2015 she was selected for the Meryl Streep/Oprah Winfrey Screenwriters’ Lab. In addition, Bird has the splendid distinction of having been disinvited to speak to the Texas Lege.

Daughter of a Daughter of a Queen, described as a “tribute in fiction,” is a creative and immersive imagining of the life of Cathy Williams, the first woman to enlist in the peacetime U.S. Army, and the only woman to serve, from 1866 to 1868, with the Buffalo Soldiers. Written in first-person narration, Williams is determined to set the record of her life straight after a reporter insinuates that her claim of having served with the Buffalo Soldiers was quite the fib.

The pace is quick and steady, with plot twists aplenty packed into cleverly constructed architecture. The amount of research required for an epic of rich historical detail is daunting and Bird has performed rigorously. A multifaceted talent, she had me variously chuckling, gasping aloud, rubbing the chill bumps on my arms, and holding my breath.

Bird’s characters come alive on the page, especially Williams, who has a sharp eye for the absurd and a righteous sense of injustice, and is unafraid to call a thing by its name. Referencing her little sister who, Williams tells us, “if she had a scrap of cloth and a walnut, would turn it into a baby doll and glue moss to if for hair. Me? I’d blow my nose on the scrap of cloth, crack the walnut open and eat it.”

Williams’ mother told her she was “meant for better than to be a brood sow for some short-weight plowboy.” Bird obliges, imagining a singular voice, life, and love for a historical figure about which little is known. I fervently hope most of it could be true.