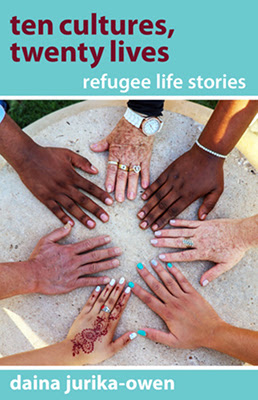 “It is true that America is a land of opportunity.” —Jolie, Democratic Republic of Congo

I volunteered a few years ago as a family mentor with the International Rescue Committee (IRC), which was born in 1933 “at the call of Albert Einstein.” I had returned from a vacation in Jordan, where I had seen the United Nations’ refugee camps for Syrians. Jordan is a tiny country with a total population of fewer than ten million people, yet it hosts three refugee camps and 740,160 refugees, the second largest proportion of refugees to population in the world.

When I returned to Texas, I did some research. At that time the number of displaced people on the planet was estimated to be a staggering sixty-five million. I was horrified by the number. During my poking about the internet for more information, I came across the IRC’s office in Abilene, Texas. I had no idea there was an opportunity so close to my West Texas home where real differences were made in the lives of the world’s most vulnerable populations. After I applied to volunteer and passed the background check, I attended orientation and met my assigned family, refugees from Rwanda.

“What I am seeing in this country is that people take care of themselves; Americans are really independent. The IRC [trains] us in that spirit, too.” —Ellie, Rwanda

Ten Cultures, Twenty Lives: Refugee Life Stories is the first book published in the United States by Daina Jurika-Owen, PhD, a folklorist and former refugee resettlement worker with the IRC’s Abilene office. While not a polished work, Ten Cultures, Twenty Lives is informative and engaging. It’s a great introduction for the curious or concerned about refugees resettling in the United States.

Jurika-Owen joined the IRC as an employment coordinator soon after the Abilene office opened in 2003. In January 2004, two refugees arrived from Liberia. Then they came in ever increasing numbers, from Congo, Burundi, Rwanda, Bhutan and Nepal, Turkey, Iraq, and Cuba. As of mid-2016, more than 2,500 refugees have been resettled by the Abilene office.

“I remember how we were landing in Abilene: it was dark already, and from above, I could see all the lights of the city, and it was beautiful. And I thought: this is America!” —Roji, Bhutan

Older refugees remember life in their homes before civil war or genocide or religious persecution or the murderous reign of countless dictators or, not infrequently, all of the above, simultaneously. Other refugees’ earliest memories are of life in a refugee camp where it’s common for them to live for ten or fifteen years. The youngest refugees were born in those camps. A mere one half of one percent of all refugees are approved for resettlement.

Jurika-Owen provides the legal definition of a refugee and a clear and concise description of the processes set in motion when they apply for refugee status. During my orientation with the IRC, I learned about the rigorous process and how long it can take, often as long as two years. Jurika-Owen’s writing dispels the myths of open borders and lax investigations. The many facts and figures are leavened with first-person remembrances from IRC staff as they worked to arrange social security cards, bank accounts, apartments, jobs, vaccinations, and school registration. That list of tasks is only the beginning.

“I admire [Abilene] because it is unbelievable that a police officer would drop you off at home and wait for you to go through your door to make sure you are safe.”—Nancy, Cuba

Jurika-Owen writes about how the residents of Abilene, wary in the beginning, have come to accept and then embrace the refugees. She reports initial alarm at Muslims being resettled “so close to an Air Force base”; another military man offered whatever help he could for an Iraqi who had saved his life; another woman who volunteered with her church to provide English classes said it’s “like a mission trip, but right here in Abilene.”

The best parts of Ten Cultures, Twenty Lives are, of course, the stories of the refugees in their own words.

“I felt that we were going to start a real life, a life with freedom. We would be like all other people: we could work, go to school, or do whatever our hearts were set on.” —Burundian refugee