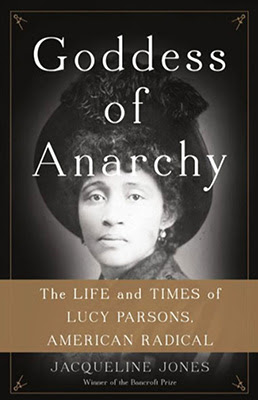 I reviewed Goddess of Anarchy: The Life and Times of Lucy Parsons, American Radical (Basic Books) by UT Austin professor of history Jacqueline Jones for Lone Star Literary Life. "Goddess of Anarchy is a dramatic and entertaining account of a difficult, complicated, and flawed but significant life almost lost to history, as are those of untold numbers of impactful women."

Lucy Parsons. Slave, freedwoman, student, wife, mother, writer, editor, internationally renowned orator, socialist, communist, anarchist, cipher. From her birth to a slave in antebellum Virginia in 1851, to her education and formative years in Reconstruction–era Waco, Texas, where she married Albert Parsons, an Anglo man who would later be hanged in connection with the bombing of Haymarket Square, to swiftly industrializing Chicago in the Gilded Age, until her death in 1942, Parsons fought for the laboring masses, freedom of speech, and freedom of assembly in a nation dizzy with change, a nation sometimes exalted by rapid innovation, oftentimes staggering beneath it. From the 1880s until the day she died, Parsons “held fast to the ideal of a nonhierarchical society emerging from trade unions, a society without wages and without coercive government of any kind.” Even if this result could be achieved only by dynamite.

Goddess of Anarchy: The Life and Times of Lucy Parsons, American Radical is the latest work of biographical history from Jacqueline Jones, professor of history at the University of Texas at Austin, MacArthur Fellow, two-time Pulitzer Prize finalist, and winner of the Bancroft Prize. Goddess of Anarchy is a dramatic and entertaining account of a difficult, complicated, and flawed but significant life almost lost to history, as are those of untold numbers of impactful women.

Goddess of Anarchy recounts much of the history of the labor struggle in the United States as told through the prism of Lucy Parsons’s singular, startling life. The Great Railroad Strike of 1877 was the catalyst for a receptive Parsons to devote her life to “the labor question” and convince her that the two-party system of Republicans and Democrats would always fail the great unwashed in order to remain in power at all costs. Believing the ballot a failure, Parsons advocated bullets.

Parsons’s contemporaries included Mother Jones, Emma Goldman, Eugene V. Debs, Samuel Gompers, and Jane Addams, with all of whom she feuded. Many of her peers thought she harmed the cause by denigrating voting and unions. When Progressivism arrived, Parsons decried charity as “hush money to hide the blushes of the labor robbers.” She thought the New Deal and FDR co-opted the movement.

Though she lived in the public eye for almost seven decades, Parsons went to great pains to veil her African origins and personal life. Parsons “expressed a deep commitment to informed debate and disquisition,” Jones writes, but in the next breath would invoke “the virtues of explosive devices.” As she states in her introduction, Jones intends a “more nuanced approach by integrating Parsons’s secret private life with her high-profile public persona.” I don’t think integration was achieved, and I doubt it possible to reconcile the contradictions of a person exceedingly talented at compartmentalization.

The most pressing issues of Parsons’s lifetime remain so in ours, a circumstance which is either wholly depressing or indicates there is truly nothing new under the sun, or both. The two-party system failed to work for the poor; technology displaced workers; the middle class eroded; money and influence corrupted elections and public policy; a “new iteration of the KKK indicated that the more the pace of technological innovation accelerated, the more likely it became that a significant portion of the white laboring classes would seek refuge in a narrow tribalism.”

Jones’s writing has a vitality to it as she explores Parsons’s many contradictions, offers psychological insights, and tartly makes her points. Jones is a master of the concise introductory paragraph and the concluding paragraph that simultaneously foreshadows and whets the appetite for the next chapter. Goddess of Anarchy is an education and a bravura performance from a stylish wordsmith.