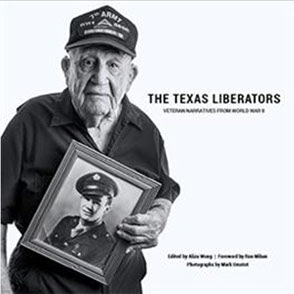 I reviewed The Texas Liberators: Veteran Narratives from World War II (Texas Tech University Press), edited by Aliza Wong, for Lone Star Literary Life. "The importance of witnessing, the necessity of not looking away, cannot be overstated."

During a trip to Israel in May 2015, I wept my way through Yad Vashem: World Holocaust Center, Jerusalem. Yad Vashem (in Hebrew: “a monument and a name”) is the World Holocaust Remembrance Center in Jerusalem, a 44.5-acre complex consisting of the Holocaust History Museum, the Children’s Memorial, the Hall of Remembrance, the Museum of Holocaust Art, sculptures, the Valley of the Communities, a synagogue, a research institute with archives, a library, a publishing house, and the International School/Institute for Holocaust Studies. You enter the Children’s Memorial in pitch darkness, then emerge into a large room filled with pinpricks of light like stars in the night sky. Each star represents a dead child.

On December 11, 1941, Nazi Germany declared war against the United States. Before World War II finally ended on September 2, 1945, the U.S. would engage in “total war” against the Axis powers of Japan, Germany, and Italy, and almost sixty million people would die. Among those dead would be more than six million Jews, Roma and Sinti, homosexuals, communists, political prisoners, and “common” criminals, murdered by the Third Reich in slave-labor and concentration camps.

More than ten million American men were inducted into the military. Of these veterans, the Texas Holocaust and Genocide Commission’s Texas Liberator Project has identified, as of the date of publication of this book, more than three hundred men who were members of the five Texas military units that took part in the liberation of forty-three different death camps. Among the camps liberated by Americans, including my grandfather John Merritt, were Buchenwald, Dora-Mittelbau, Mauthausen, and Landsberg, one of eleven subcamps of Dachau.

The debate about how much the U.S. government knew about Germany’s plans to exterminate European Jews continues, though The New York Times reported on the Chelmno camp as early as July 1942. Most of the veterans interviewed for The Texas Liberators did not know what to expect, and some would break into tears these many decades later when recounting their memories.

Umstot’s portraits, some in extreme close-up, are profoundly touching and eerily personal. The black-and-white photographs on heavy, glossy stock, some accompanied by the veterans’ military portraits, document dignity in each wrinkle, and provoke wonder at the twinkle in eyes that have witnessed the worst we can do to each other— “bodies stacked like cordwood … laid out like a parking lot.”

The importance of witnessing, the necessity of not looking away, cannot be overstated. Thank you for your service.