Review: A PEOPLE'S HISTORY OF THE VAMPIRE UPRISING by Raymond A. Villareal 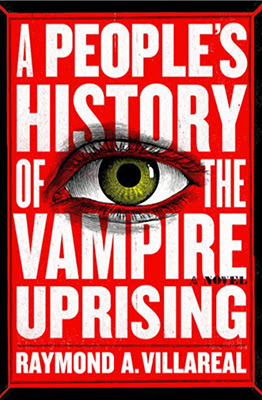 I reviewed A People's History of the Vampire Uprising: A Novel (Mulholland Books) by San Antonio attorney Raymond A. Villareal for Lone Star Literary Life. I had high hopes for this one, y'all, but those hopes were dashed.

“These pages are compiled for everyone: those who lived through this time, and those who did not survive. I hope … they give you meaningful perspective.” (signature redacted)

A body exhibiting the sort of intradermal contusions affiliated with hemophilia, but no other signs of trauma, is discovered outside Nogales, Arizona. When the state crime lab reports unidentifiable substances in a hair sample from the body, the town coroner, fearing something Ebola-like, reports the curious findings to the Centers for Disease Control (CDC). When Dr. Lauren Scott, a research physician with the CDC, arrives in Nogales, the first body is gone but another has been found with identical symptoms. Dr. Scott discovers two tiny puncture wounds in the neck of this second body.

What happened to the first body, you ask? It got up and walked out.

A People’s History of the Vampire Uprising: A Novel, the first book from San Antonio attorney Raymond A. Villareal, is apocalyptic dystopia, a very popular genre. Unfortunately, it reads like a mashup of “The Walking Dead,” “True Blood,” and The Da Vinci Code.

Villareal begins with a decent concept. The vamps in Villareal’s world are called “Gloamings,” presumably because twilight is the time of day when it’s safe for them to emerge. They are carriers of what the government calls the Nogales organic blood illness (NOBI). The Gloamings possess all of the classic vampire traits—speed, strength, hypnotic abilities. The author does an admirable job of relating current societal ills to the vampires: fake news, social media, polarized politics, and conspiracy theories. Law enforcement is accused of unnecessary force. Lobbyists appear. An equal-rights bill is passed. Certain religious denominations excommunicate members who become Gloamings, but the Buddhists are cool with it.

Consider: Should vampires, with their enhanced physical attributes, be allowed into the Olympics? Would their lifespans make them the ultimate astronauts? Do they qualify as a protected class under the Family and Medical Leave Act or the American with Disabilities Act? Naturally, celebrities (Taylor Swift!), tech billionaires, and hedge fund managers “re-create” intentionally. Pursuits take place in Texas locales like Marfa and Houston, though with little local detail to reward the reader’s interest.

Though wildly imaginative, A People’s History of the Vampire Uprising is enamored of its own cleverness, including footnotes and appendices, an affectation for which I blame David Foster Wallace. Clumsy execution hampers Villareal’s creativity. The dialogue is mundane and odd word choices and nonsensical similes are distracting. Vampire Patient Zero “moves like a cat” while “lurching” toward Dr. Scott. The handcuffs snap off “like wet paper.”

A People’s History of the Vampire Uprising failed to hold my attention. The story is related in a compilation of various newspaper reports, magazine articles, blog posts, congressional testimony, interrogation transcripts, and interviews of eyewitnesses. Because the story is told in bits and pieces, the narrative arc is nonexistent. On the other hand, the obstructed narrative flow does mimic the process by which information is disseminated, and images created, in the twenty-first century. The staccato style also precludes any emotional investment in Villareal’s characters. I was briefly cheered when Buffy (the Vampire Slayer) appeared but, fierce and entertaining as she is, she can’t rescue the story alone.

If you like horror, and vampires in particular, I recommend In the Valley of the Sun (Skyhorse Publishing, 2017) by Andy Davidson. The anonymous compiler of this history, whose note began this review, hopes in vain.