Review: WHISPERS OF THE DEAD by Spencer Kope 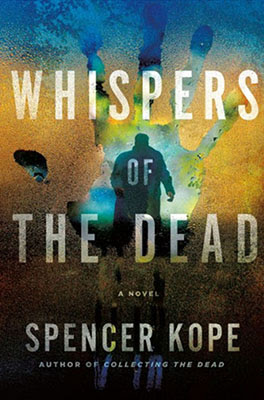 I reviewed Whispers of the Dead: A Special Tracking Unit Novel (Minotaur Books) by Spencer Kope for Lone Star Literary Life. Unfortunately, y'all can probably skip this one.

A pair of human feet are found in a Styrofoam cooler in the middle of a judge’s living room in El Paso, Texas. Another pair are found in a defense attorney’s living room in Tucson. FBI Operations Specialist Magnus Craig and his partner, FBI Special Agent James Donovan, along with intelligence research specialist Diane Parker, form the FBI’s Special Tracking Unit. They have a serial killer on their hands, apparently meting out vigilante justice.

Whispers of the Dead: A Special Tracking Unit Novel is the second in a mystery-suspense series by Spencer Kope, a crime analyst for the Whatcom County Sheriff’s Office in Washington State. Collecting the Dead (Minotaur, 2016) is the first installment in Kope’s series, and while not necessary to understand and follow the action in Whispers of the Dead, it provides some references to prior events, including in the epilogue, which also tees up the third book.

The main protagonist is Craig, a conflicted crimefighter haunted by previous cases, in whose first-person voice the story is told. The twist in this series is Craig’s ability see what he calls “shine” (Stephen King, anyone?), which is like a person’s aura; everyone has a unique shine, like DNA and fingerprints. This is how Craig associates disparate victims with a single killer. Only a handful of people are privy to this ability, and shine not being admissible in court, Craig and Donovan get creative with the chain of evidence.

Whispers of the Dead is full of personality and often amusing. Craig and Donovan are an entertaining duo; Craig is the wisecracking little brother — think Beaver Cleaver — whose “mouth frequently outruns [his] common sense,” to Donovan’s straight man and older brother Wally. Or like Eddie Murphy and Nick Nolte in 48 Hrs.

Many passages in Whispers of the Dead tend toward the purple, as in “stars so thick it’s as if some astral giant poured out honey upon the blanket of night.” Other passages are genuinely creepy. Still others combine the two: “Overwhelmed and surrounded, a single incandescent bulb pushes back defiantly against the stygian black.”

Kope is capable of precise, evocative phrasing; a suburban neighborhood is the sort “where kids play ball in the street until annoying hours of the night,” one of the cookie-cutter McMansions “a charming clone dressed in forest-green.” But too often the metaphors are just weird. “Words burst from his mouth like so much bad soup.” And “He tries to swallow the laugh, which goes about as well as giving a gremlin a bath.” I’ve formed a hypothesis about these descriptions. Since they’re often juvenile, could they be a deliberate choice to reflect Craig’s personality, rather than oddities of Kope’s writing?

Whispers of the Dead is a blend of psychology, police procedural, and the paranormal, with notes of “Dexter”; while it has its good points in the personalities of, and dynamic between, the protagonists, it’s inconsistent, unremarkable, and derivative. The pace is quick and even, and Kope’s professional experience as a crime analyst provides interesting science and forensics. And while the clue that provides the big break is inspired, none of these are enough to recommend the whole.