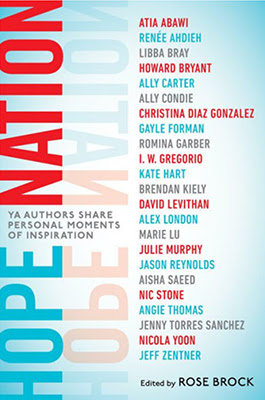 I reviewed Hope Nation: YA Authors Share Personal Moments of Inspiration (Philomel Books) edited by Rose Brock, co-founder of the North Texas Teen Book Festival, for Lone Star Literary Life. "Some of these essays made me smile, some made me laugh aloud, others touched me deeply; still others left me teary, and they all offered perspective."


“To know a person’s story is inevitably to understand their humanity and feel a loving kinship with them, no matter how different the two of you may seem at first. This … is what gives me hope.”—David Levithan, “We”

Hope Nation: YA Authors Share Personal Moments of Inspiration is a new collection of essays edited by Dr. Rose Brock, a Texas librarian and educator, cofounder of the phenomenally successful North Texas Teen Book Festival and recipient of the Siddie Joe Johnson Award, bestowed by the Texas Library Association upon a librarian who “demonstrates outstanding library service to children.”

Brock chose tales of “resilience, resistance, hardship, loss, love, tenacity, and acceptance” from some of her favorite Young Adult authors because, as Mister Rogers famously advised, “during a crisis, it’s vital to look for the helpers.” Brock considers these authors and their stories to be helpers.


“Sometimes, hope is asking for help because you need someone else’s hope to light the way.” —Libba Bray, “Before and After”

Some of these essays made me smile, some made me laugh aloud, others touched me deeply; still others left me teary, and they all offered perspective. Hope Nation’s contributors are smart, generous, passionate, compassionate people; they come from many races, ethnicities, genders, religions, and persuasions.


“My hope lies in young Book People … our brightest beacons of empathy. It takes great empathy to be so interested in the lives of other people that you don’t even demand that they really exist.” —Jeff Zentner, “Nobody Remembers the Names of People Who Build Walls”

These pieces explore the nature of hope and the many forms it can assume [new life, a song, humor —see Kate Hart’s “Wings and Teeth” for her internal debate with her Shoulder Cynic, and I. W. Gregorio’s “origin story of a female urologist” — travel, bakeries], even in the face of abuse, discrimination, disease or injury, poverty, and addiction. Many of these stories deal with immigration, a particularly timely topic. Some essays are more literal than others, and Emily Dickinson’s “hope is the thing with feathers” gets a workout.

Very occasionally a pedantic tone emerges, more often the tone is gentle exhortation, even if sometimes harrowing and profoundly personal (see “In the Past” by Jenny Torres Sanchez). Some take on the era of Trump head-on, such as Aisha Saeed’s “The Only One I Can Apologize For.” Others are subtle, like Alex London’s “Different Dances,” but the personal is always political.


“Sometimes you have to search for tiny hopes until tiny hopes make bigger hopes.” —Julie Murphy, “Hoping for Home”

Nic Stone’s “Always” finds commonalities. Ally Carter’s “The Two Types of Secrets” recommends finding examples and mentors, in which the care and feeding of dreams is like yeast—a living thing which requires care. Jason Reynolds and Brendan Kiely discuss the kids they met and things they learned on the tour for All American Boys, such as easy doesn’t equal happiness, and difficult doesn’t equal sadness. And if all else fails, break out the Shel Silverstein.


“Hope is a decision.” —Rose Brock

Posted by Texas Book Lover at 8:30 AM