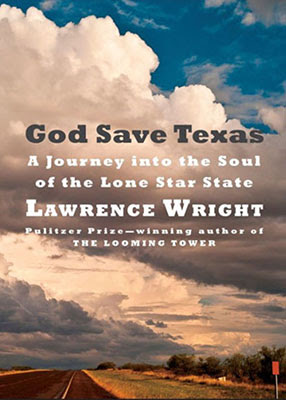 I reviewed God Save Texas: A Journey into the Soul of the Lone Star State (Alfred A. Knopf) by Lawrence Wright for Lone Star Literary Life. "By turns funny and fond, disgusted and resigned, Wright defaults to weary exasperation, but he can’t deny that only Texas feels like home."

TEXAS POLITICS/SOCIAL SCIENCES
Lawrence Wright
God Save Texas: A Journey into the Soul of the Lone Star State

In a former life, I was a paralegal for an international law firm in Dallas. During a conversation with a lawyer from Philadelphia, he told me something astonishing. According to him, neither does Pennsylvania require years of state history in school curriculum, nor do automobile manufacturers create Pennsylvania-edition SUVs. He’d never experienced anything like the Texas identity juggernaut and wanted me to explain it. I’m going to send him an email recommending Lawrence Wright’s new book.

Wright focuses his razor-sharp lens inward and on his home state in God Save Texas: A Journey into the Soul of the Lone Star State. Austinite Wright is a staff writer for The New Yorker, playwright, screenwriter, novelist, and author of ten books of nonfiction, including Pulitzer Prize winner The Looming Tower (Alfred A. Knopf, 2006). God Save Texas is history lesson, cultural criticism, reporting, and memoir. By turns funny and fond, disgusted and resigned, Wright defaults to weary exasperation, but he can’t deny that only Texas feels like home.

God Save Texas is written in first person, rare for Wright. When he references “my friend Steve,” he is referring to beloved Texas writer Stephen Harrigan, with whom he has been close friends for decades and frequently debates questions of Texas’s hegemonic personality. Wright claims you can get a crash course in Texan-ness by perusing the merchandise at Buc-ee’s, which embodies Texas archetypes — “a low-brow society … that finds its fullest expression in a truck stop on the interstate.” This is harsh. Wright names the usual culprits: rugged individualism, simple patriotism, isolationism, nostalgia for a past that mostly never was, insubordination, braggadocio. “It’s an irony that the figure who most embodies the values people associate with [Texas],” Wright notes, “is a narcissistic Manhattan billionaire now sitting in the Oval Office.”

Wright accuses Texas of “[nurturing] an immature political culture” that has harmed not only itself, but the entire country, because “what happens here tends to disproportionately affect the rest of the nation,” from textbooks to undemocratic redistricting schemes to the Tea Party to Alex Jones. Texas simultaneously reflects frontier myths and predicts the future. Thankfully, as Wright admits, the old stereotypes are softening around the edges with new stereotypes — hipsters, musicians, technology titans, and a growing artistic community. Texas has plenty to be proud of, and cautious optimism is excused.

Wright interjects personal anecdotes to enliven the facts and figures, sometimes approaching stream of consciousness. If you live in Texas and are sentient, then you won’t find surprises in God Save Texas. If you haven’t been paying attention, it’s a fine primer on policy, and it makes a collective impact gathered in one volume.

I admire Wright’s work and his brain. He’s a smart guy with a dry humor and a thoughtful, precise manner, though he meanders periodically here. The conclusion is disappointing because there isn’t one; I wanted a grand summation of the thesis, but God Save Texas ends abruptly.

Wright is conflicted, so why does he live here? For the same reason I do. Like Wright, I have left and returned. I have tried to be someone else, somewhere else, but those places aren’t home. And to paraphrase from Attica Locke’s Bluebird, Bluebird, Texas is mine, too, and I refuse to surrender it.