Review: WHAT WE RECKON by Eryk Pruitt 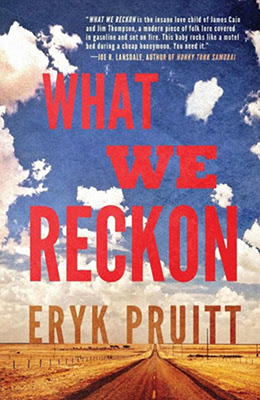 Y'all, every word of this review is true, I swear it.

I reviewed What We Reckon (Polis Books) by Eryk Pruitt for Lone Star Literary Life. "What We Reckon is East Texas noir with elements of farce, a wild ride both disturbing and disturbed, as if Larry Brown climbed into that contraption in The Fly, but instead of an insect getting spliced with Brown, it was Carl Hiaasen."

reckon: 1. to settle accounts; 2. to make a calculation 3. a. judge, b. chiefly dialectal: suppose, think; 4. to accept something as certain: place reliance—Merriam-Webster Online

Jack Jordan (aka Grant, Keith, Hux, Andrew, ?) and Summer Ashton (aka Jasmine, Stormy, Christy, Autumn, Katrina, ?) are on the run from South Carolina to East Texas with a stolen kilo of cocaine hidden in a hollowed-out King James Bible. Lifelong grifters, they wash up in Lufkin, Texas, with new identities and old habits. Jack and Summer soon establish their trade, picking up product in Houston and selling it to university students in Nacogdoches. All is well (more or less) until Jack falls for a co-ed, declaring that he’s going straight (and he means it this time), leaving Summer to her abandonment issues and psychedelic therapy.

Rules of the road: “Never contact anyone from the past. Let sleeping dogs lie.”

What We Reckon is the third novel from award-winning screenwriter, author, and filmmaker Eryk Pruitt, whose short story “Knockout” was a finalist for the Derringer Award. What We Reckon is East Texas noir with elements of farce, a wild ride both disturbing and disturbed, as if Larry Brown climbed into that contraption in The Fly, but instead of an insect getting spliced with Brown, it was Carl Hiaasen.

Pruitt’s codependent antihero and -heroine are indiscriminate junkies, hard to like but easy to appreciate. Jack, who appears to suffer neurological damage and anxiety attacks from too many (or not enough, depending) substances, is pure con man with no redeeming qualities. Summer remains a child at heart—proud and confident one moment, vaguely suicidal the next—a restless chameleon with a gift for reading people, longing for a home, fearing Jack will shed her unceremoniously one day without warning. Summer’s the smarter of the two, but she’s got voices in her head that aren’t always her own. They are each equally dangerous, to each other and anyone who gets too close, exerting gravity like a charismatic black hole.

What We Reckon is fast-paced and twisty, sometimes archly humorous (as when a friend “commenced a melee upon their counterpart”), frequently laugh-aloud funny (as when they heard knocking at the front door “where only came cops and pizza delivery guys and hey, didn’t nobody order a pizza, but before Jack could say a word, the population increased by five and one giant German shepherd”), with smart, sharp dialogue which makes me imagine “The West Wing” with Charlie Sheen instead of Martin:

Donnie called, “Did none of you try CPR?”
“We prayed and prayed,” said Suzie
“That’s all you can do,” Barney assured them.
“It literally isn’t,” said Donnie.

Pruitt is also capable of curiously moving pathos, as when Summer recites the things only Jack knows about her. Pruitt possesses a distinctive style, playing with cadence and word order (as when Summer decides to “focus her attention on fields of greener pasture”).

What We Reckon is by turns horrifying and bemusing, but always entertaining. The resolution is unexpected, strangely elegant and comforting. And somehow the whole package puts me in mind of O Brother, Where Art Thou?