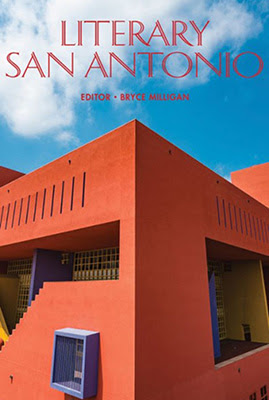 Literary San Antonio is a handsome, oversized edition, the cover graced by an image of the “enchilada-red” façade of the central San Antonio Public Library. The latest in Texas Christian University Press’s Literary Cities series, Literary San Antonio is edited by Bryce Milligan, the publisher, editor, and book designer at Wings Press since 1995. Milligan, a resident of San Antonio since 1977, is also a poet, folk singer, and luthier, among too many callings to count. Unafraid to rouse a few rabbles, Milligan is a wonder of artistic vitality and a blessing to San Antonio. Married to librarian and author Mary Guerrero Milligan, he dedicates Literary San Antonio to her, “una verdadera hija de este pueblo,” and credits her for his love of cultura.

Literary San Antonio is divided into five parts: Historical Writing, Journalism and Political Essays, Poetry, Drama, and Fiction. The pieces, chosen to represent the “multiethnic, multilingual, cosmopolitan culture of the city that drew writers and artists,” are diverse in subject and genre, and rich in place. Featured writers include poets Carmen Tafolla (“This river here / is full of me and mine”), Jim LaVilla-Havelin, Amalia Ortiz, and Robert Bonazzi; journalists Frederick Law Olmsted, who in the nineteenth century compared San Antonio favorably to New Orleans for “picturesque interest … and antiquated foreignness,” and Jan Jarboe Russell, who wrote in the twenty-first, “Besieged by critics on all sides, the Daughters of the Republic of Texas have once again vowed to fight to the death.” Novelists include thriller writer Jay Brandon, historical fiction writer Stephen Harrigan, everyone’s favorite children’s fantasy author Rick Riordan, and the queen of everything Sandra Cisneros.

Milligan possesses an encyclopedic knowledge of his subject and a sharp wit. His introduction is a feast of literary history. He begins at the beginning with songs in indigenous Coahuiltecan languages, for the area has been occupied for approximately 15,000 years. Milligan covers the first successful newspapers in San Antonio in the 1850s, to La Prensa, which was published for fifty years, begun in 1913, on up to Bárbara Renaud González in the 1990s, the first Chicana columnist in Texas. Other notables include Oscar Wilde, who stayed at the Menger Hotel during a lecture tour in 1882 (“men in Texas cannot survive more than an hour between beers”); Stephen Crane, who sang the city’s praises in 1894; and O. Henry, who experienced numerous misadventures in San Antonio — and set six short stories there. Graham Greene hit town in 1939, describing San Antonio as “half Mexican and half Will Rogers,” and Ambrose Bierce passed through before disappearing into thin (revolutionary Mexican) air.

San Antonio holds an honored place in the births of political and civil rights movements, and the passages relating the ties between the Mexican Revolution and the flourishing of Latino literature in San Antonio are fascinating. Many writers and journalists fled Mexico for exile in San Antonio. Francisco Madero’s Plan de San Luis Potosí, which urged armed rebellion, “literally [calling] the Mexican Revolution into being,” was written and published in San Antonio. Pioneers of the Chicano literary movement in the 1960s believed San Antonio to be “el Corazón de Aztlan.”