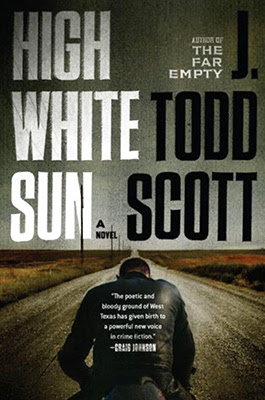 I reviewed J. Todd Scott's second border-noir novel, High White Sun (Putnam Books), for Lone Star Literary Life. It's a good book, like the first (The Far Empty), and he's a versatile, talented writer, but he still needs a good editor to tighten the focus. Scott could be great, but not yet.

The trouble begins with a traffic stop gone wrong, then the driver running down a sheriff’s deputy and leading most of the department on a high-speed chase across the desert on US90, just north of Big Bend National Park. The mystery begins when spike strips end the chase, and the out-of-state driver recognizes Sheriff Chris Cherry’s newest deputy, America Reynosa, calling her “La chica con la pistola.”

Meanwhile, when the body of a local river guide turns up beaten to death in Terlingua, the local law learns the Aryan Brotherhood of Texas (ABT) has arrived in the county, awaiting the arrival of a white-supremacist “preacher” bent on race war, with plans to build an all-Anglo town. What the ABT doesn’t know is they not only have a mole in their midst, but one of them is a federal witness, an informer.

Clues, oblique references, and foreshadowing eventually coalesce into a frightening picture as multiple, seemingly unrelated subplots lock into place in High White Sun: A Novel by former DEA agent J. Todd Scott, his second border noir and a sequel to The Far Empty (G.P Putnam’s Sons, 2016). Scott pulls me in immediately, excelling at the quick, hard hook. He conjures an atmosphere of pervasive menace among the ocotillo and creosote of the Chihuahuan desert, which, despite the drought, is fertile ground for literary suspense, where “summer lightning … chas[es] its own bright tail” on “the outer edge of empty.”

Scott is a versatile writer. His cast of characters is large, the narrative shifting perspective constantly moving between points of view, slipping between third and first person. Chris Cherry is now the sheriff, attempting “kinder, gentler policing” because they’re “not bounty hunters, and … not in the revenge business.” But, as Chief Deputy Ben Harper reminds him, “Hope is not a strategy.” The relationship between Chris and his girlfriend, Melissa, is sweetly rendered. Scott creates an entertaining mix of personalities in Sheriff Cherry’s department, and the interactions between those personalities feel authentic, as does his depiction of the “casually dangerous” game of family dysfunction among the terrorists of the ABT. Dark, sardonic humor lends levity (“Being this close to the border should give [the ABT] hives—it was practically enemy territory”).

I reviewed The Far Empty favorably in these pages in June 2016, while noting that Scott allows the tension to lapse during extended flashbacks conveying backstories meant to illuminate his many characters’ competing agendas and motivations, and that more rigorous editing would tighten the focus. Unfortunately, High White Sun also suffers from these flaws. Though more evenly paced, it lags sporadically during those elaborate backstories. Scott whips up the pace leading into the final showdown, but the climax unfolds over more than one hundred pages, again allowing tension to dissipate and the reader to relax.

High White Sun is suffused with violence (and innumerable ellipses), and most people have gone a touch crazy from the heat, but it’s got soul. Scott confronts tough questions about the nature of duty, the price of peace, the possibility of redemption, the elastic definition of justice, and the cleansing properties of fire and rain.