Review: EVERYONE KNOWS YOU GO HOME by Natalia Sylvester 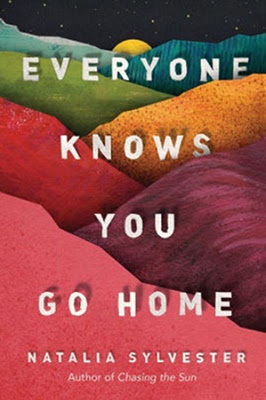 Isabel sees dead people. She and Martin were married on Día de los Muertos, “which no one gave much thought to in all the months of planning, until the bride’s deceased father-in-law showed up in the car following the ceremony.”

Martin’s father, Omar, and his mother, Elda, crossed the Rio Grande while she was pregnant with Martin, delivered to McAllen to make what they could of their new beginning. Several years later, Omar disappeared without a trace and without explanation when Martin was seven years old. Two decades later, Isabel knows very little about Omar; no one in Martin’s family speaks of him. Omar reappears each year on Isabel and Martin’s wedding anniversary, and Isabel begins to ask questions. When Eduardo, a teenage cousin of Martin’s from his father’s side of the family in Mexico, arrives in an HEB parking lot, telling how Omar helped him make the journey to the border, the entire family must reckon with secrets from the past, and the precariousness of lives lived in-between.

The third-person narration moves back and forth in time, flashing back to Omar and Elda’s struggles to cross the border safely and establish a beachhead, then returning to the present, to the established lives of Isabel and Martin. Elegantly constructed, Everyone Knows You Go Home is briskly and evenly paced, clues carefully placed and plot twists seamlessly woven. There is very little exposition in this novel; Sylvester has a gift for showing us who her complex characters are through their reactions to events, their development flowing naturally. Her second novel is a rare thing, driven equally by character and plot.

In Everyone Knows You Go Home, Sylvester’s use of magic realism has the feel of mythology in Omar’s descriptions of his afterlife limbo, and the apparent physics of his manifestation, buffering “like a video call reloading over a weak connection.” Omar is trapped, explaining to Isabel that he needs her help to redeem himself with Elda, because “sometimes our best intentions become our worst mistakes.”

Sylvester is equally adept at humorous dialogue: Isabel turns to Martin; “Did you know this would happen?” she said. “No, but it’s typical of him … Only someone so shameless would show up to a wedding uninvited.”; and the poignant: “one piece of scarred skin after the other, [Eduardo] showed [Isabel] the souvenirs of his journey.” There is wisdom here, too. As Elda says, “Decisions are not the same as choices.” Sylvester manages to evoke this immigrant experience in two sentences that speak volumes. As Omar is wandering the halls of a McAllen high school, “He tried to imagine this being the world they grew up in. He thought, We might’ve stayed younger longer.”