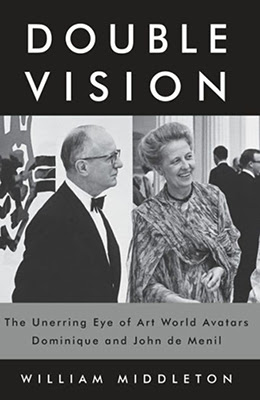 I reviewed Double Vision: the Unerring Eye of Art World Avatars Dominique and John de Menil (Alfred A. Knopf) by William Middleton for Lone Star Literary Life. It is impossible to overstate the contributions of the de Menils to Houston and modern art, and now it's impossible to overstate the importance of Middleton's superb biography, encyclopedic yet profoundly personal.


“I’m after the excitement not the object per se—after the light, not the bulbs. I’d like to provide for people plenty of bulbs to switch on.” —Dominique de Menil

Y’all know that old question asking who you’d invite to your dinner party if you could invite anyone you wanted? I’d invite Dominique and John de Menil.

Born in France at the beginning of the twentieth century, they came to Houston, Texas, in the early 1940s with the family oilfield services multinational that would become Schlumberger Limited. John de Menil was a baron; Dominique the heir to Schlumberger, descended from a distinguished line of French intellectuals, important to the governments of kings and emperors. Over the decades, the de Menils built the Menil Collection, the Rothko Chapel, the Byzantine Fresco Chapel, and the Cy Twombly Gallery, and underwrote the Contemporary Arts Museum Houston. Their personal collection exceeded 20,000 works of art, including paintings, drawings, photographs, sculptures, rare books, and decorative objects. They were not only the vanguard of art collectors and advocates, but thought leaders in civil rights, human rights, and ecumenicism, often still a dicey proposition, not to say dangerous, in Texas.

How in heck did these two wash up in Houston, you ask? It’s a fascinating story well told. Dominique and John de Menil come alive again in these pages.

Double Vision: The Unerring Eye of Art World Avatars Dominique and John de Menil is the new biography of the first family of Houston’s arts community by William Middleton. Middleton, a journalist and editor who has worked with Harper’s Bazaar, the New York Times, and Texas Monthly, among other outlets, has written an encyclopedic yet profoundly personal account of not only the extraordinary lives of Dominique and John de Menil, but a history of the flowering of modern art in the United States post–World War II.

Middleton begins in the New World, with the opening in 1987 of the Menil Collection. Part Two takes a deep dive into the Old World, Normandy in the eighteenth century, leisurely making his way back to Houston and the death of Dominique de Menil in 1999. Along the way we get an education—European history, American history, art history, and how to view art with a good eye and proper attitude, tracing their developing aesthetic from Alsace to Paris, then New York to Houston. Obviously a labor of love, Middleton’s book doesn’t shy from more difficult aspects of the de Menils, notably the controversy involving art thieves, cultural appropriation, and those Cypriot Byzantine frescoes. While it’s dense with minute detail and overly long—I suggest sitting with your knees drawn up so as to prop up the book and rest your wrists—it’s impossible to overstate the importance of Middleton’s superb work.

Middleton conducted ten years of research and writing in Paris, New York, and Houston. He had the cooperation of the five de Menil children, as well as extended family, friends, artists, and colleagues. He was granted interviews, provided with candid family photographs, and given use of the family archives. Double Vision is an intimate work that includes not only sixteen pages of photographs, but also 135 illustrations throughout the text, representing an impressive feat of curation itself.

Dominique and John de Menil are household names in Houston, and now, thanks to this supreme effort of research — indeed, immersion —the rest of Texas, and the world, will understand why the de Menils are considered “the Medici of modern art.”


”[Great artists] can be difficult, dissolute, but they are never base and in their quest for perfection they come closer to eternal truths than pious goody-goodies. So we are collectors without remorse.” —John de Menil