Review: THE LINE BECOMES A RIVER - DISPATCHES FROM THE BORDER by Francisco Cantú 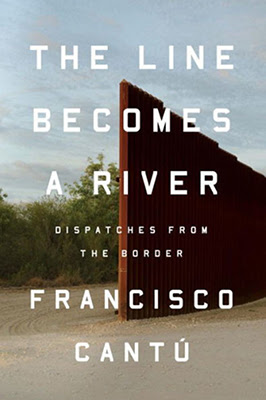 I reviewed The Line Becomes a River: Dispatches from the Border (Riverhead Books) by former Border Patrol agent Francisco Cantú for Lone Star Literary Life. This is a profoundly disturbing memoir, visceral and instructive. It left me unsettled, troubled. The southwestern border is basically a vast graveyard, according to a Texas sheriff.

They come from Michoacán and Guadalajara, from Oaxaca and El Salvador. Men, women, children, entire families. Some are heroin mules, “coyotes,” and cartel scouts; some are pregnant women, children escaping gangs, and fathers who want to feed their kids. One man offers to clean up around the station while he waits for the bus that will return him to Mexico. Sometimes the migrants’ backpacks are dumped on the desert floor, the water drained, the clothes and food burned. Other times, the migrants’ blistered feet are washed and bandaged. There are abandoned drug loads and abandoned people, extraordinary cruelty and ordinary kindness, paranoia and compromising situations, kidney failure and the comatose and the dead. The Southwestern desert is a vast graveyard. A Texas sheriff notes, “For every one we find, we’re probably missing five.”

The Line Becomes a River: Dispatches from the Border is the first book from Francisco Cantú, a former U.S. Border Patrol agent. His writing has appeared in Harper’s and Guernica, among other publications, and Cantú won a Pushcart Prize and the 2017 Whiting Award. The Line Becomes a River is a profoundly disturbing memoir of Cantú’s years in the Border Patrol during years of breathtaking violence, when Felipe Calderón was president of Mexico and challenged the cartels.

Cantú, whose family came from Mexico, spent time growing up in West Texas, his mother a park ranger. He left the desert for Washington, D.C., and earned a degree in international relations, studying the southern border. Seeking to add practical experience to his academic studies, Cantú entered the Border Patrol academy. “The government took my passion and bent it to its own purpose,” his mother warns him. “Stepping into a system doesn’t mean that the system becomes you,” he parries.

Divided into three parts, The Line Becomes a River is composed of a series of vignettes, sometimes approximating stream-of-consciousness. Cantú is conflicted and dreams of wolves and disintegrating teeth; Jungian psychology provides context. He alternates between the anecdotal and the empirical, fitting human faces to the facts and figures—all those numbers—and providing a history of the line—all those broken treaties. Cantú has read his Charles Bowden and Molly Molloy and Sara Uribe.

After Cantú left the agency to attend graduate school, he learns that a friend with whom he shared breakfast almost every morning, José, has been arrested re-entering the country after visiting his dying mother. It’s the first time Cantú visits anyone in detention, attends the court hearings, witnesses the slow-motion ripping apart of a family. The last part of The Line Becomes a River is related in José’s voice, a very effective technique, visceral and instructive: “The U.S. is making criminals out of those who could become its very best citizens.”

The Line Becomes a River seems an honest examination of conscious, a reckoning on Cantú’s part. Though he occasionally strays into melodrama, I admire Cantú’s writing and was moved by the stories he relates. Still, The Line Becomes a River leaves me unsettled, troubled by something I can’t quite put my finger on. Cantú wonders whether his shame can be redeemed, spiritual sickness healed. I wonder at the costs to human beings of what sometimes seems a personal experiment on the part of Cantú.