Review: THE KINGS OF BIG SPRING by Bryan Mealer 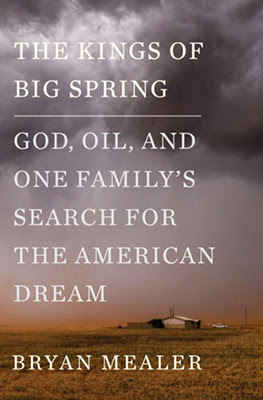 “Only in Texas was there enough space for so many second acts.”

The Kings of Big Spring: God, Oil, and One Family’s Search for the American Dream is the best kind of history. The microcosm of a family story (anecdote) illustrates the macrocosm of a place and time (demographic). In Bryan Mealer’s account, his family’s history begins in 1892, when “trouble between the moonshiners and revenuers” motivated his great-grandfather to leave a Georgia hollow behind to join his brother in Texas, where he landed in Hillsboro. By 1909, motivated by the boll weevil, the Mealers lit out for West Texas, along with many others who “pulled their teams across the 98th meridian and entered the American West,” eventually finding their way to Big Spring, where oil has been discovered, refineries has been built, and a fifteen-story hotel is rising.

The Kings of Big Spring is Mealer’s biography of his family, part reporting and part deep dive into the psychology of a people, a time, and a place. Mealer is a former award-winning reporter for the Associated Press and Harper’s, which experience serves him well in the research and interviews involved in The Kings of Big Spring, his fourth book.

Mealer narrates in a hybrid of first person and omniscient, sprinkled with asides addressed directly to the reader. He has a flair for storytelling, a certain folksiness that is comfortable and humorous, rather than cartoonish. He writes movingly of the individual effects of drought, boll weevils, land swindles, OPEC, illnesses, death and dismemberment, and cyclical oil booms and busts (“a sour smell on the wind promised meat on the table”). He writes informatively on the settlement of Texas, the history of an industry, and the salutary effects of old-time religion in this setting. Mealer is equally adept at descriptions of horrific living conditions during the first oil booms, fascinating geology, and scary meteorology (dust storms mix with blizzards in a “freak circus of nature”).

Mealer pulls no punches, but his affection and admiration for his restless, driven family are clear. Mealer is sometimes exasperated by self-defeating behaviors and the fickleness of luck, and incredulous about family members allowed to simply disappear, incidents that wouldn’t be tolerated today. Mental illness, alcoholism, and jaw-dropping penury are handled sympathetically, sometimes sorrowfully.

The Kings of Big Spring is swiftly and evenly paced, mostly chronological, with a large cast of characters who are difficult to keep track of—for the family itself and the reader. The family tree and list of supporting characters included immediately before the prologue is necessary; you will find yourself referring to it.

Two steps forward and one step back, rich in detail and imagery, The Kings of Big Spring is an entertaining, educational, and engaging addition to the sparse library set at the juncture of the Chihuahuan desert and the Southern Plains. I grew up in the Permian Basin, born about a decade before the author. I recognize this country and these people. As Mealer writes, “This country can promise less and deliver more than anywhere on earth.”