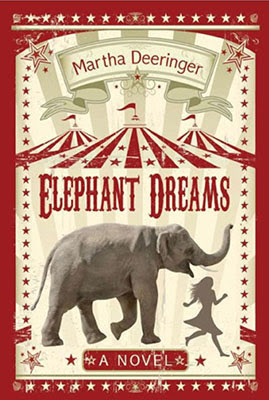 Sixteen-year-old Fiona Finn is homeless on the nineteenth-century streets of New York City. After her mother’s death from consumption, her father’s drinking problem subsumed him. Fiona was scavenging for food when the family was evicted; when she returns to the apartment, her father and little brother, Frank, are gone. Fiona has been living in the basement of a condemned tenement, and finally seeks help and refuge in a church after almost being nabbed on the street by a pimp.

The Children’s Aid Society wants to send Fiona west on an orphan train, but her father refuses to sign the documents. He, too, thinks she can make money on street corners, enough to keep him insensately soused. So the society arranges for Fiona to work for them, helping on the trains with the orphans who do go west to new lives. When Fiona’s father stows away on the train, she escapes during a stop in Houston and finds her way to a circus—"The Mollie A. Bailey Show, A Texas Show for Texas People.” As luck would have it, the elephant girl has just run away to marry one of the clowns. Fiona dons the costume, thinking it the perfect disguise to elude the law and her father’s attempts to reclaim her.

Elephant Dreams: A Novel is new historical YA fiction from Texas author Martha Deeringer. The fun cover art promises a charming tale, and Deeringer delivers. Creative and well plotted, the action begins on page one and proceeds at a brisk pace with plenty of twists and surprises. Elephant Dreams is a fine adventure and held my attention until the last page.

Older readers may find her too good to be true, but I was immediately taken with Fiona. She is scrappy, smart, industrious, and brave. Her journal writing strikes me as more sophisticated than her limited education and circumstances would suggest, and her Irish accent and inflections come and go. Though not entirely realistic, as she possesses no discernible flaws, Fiona is an inspiring, entertaining character for middle-grade readers.

Deeringer is a talented, versatile writer. Fiona’s first meeting with Bolivar the Asian elephant is laugh-aloud funny; budding first love is sweet and tender; tension is tight. Deeringer skillfully weaves multiple societal issues and details of the period into the third-person narration, and provides a visceral sense of the orphan train, writing movingly of poverty and desperation. Deeringer’s characters are engaging and diverse, the circus family endearing. Mollie Bailey, whose character Deeringer borrows from real-life events, is an admirable woman, equally adept at business and kindness, a great role model for the virtues of independence, integrity, and gumption.