Review: THE WHICH WAY TREE by Elizabeth Crook 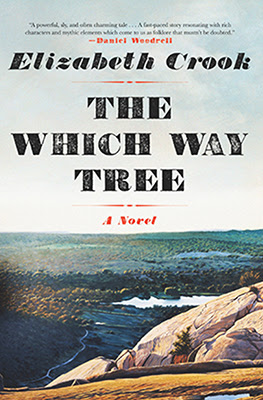 I reviewed The Which Way Tree: A Novel (Little, Brown and Company) by Elizabeth Crook for Lone Star Literary Life! This is an enthralling adventure, a Texas fairy tale in the truest sense of that term—not a Disney version, but a Brothers Grimm, Old World fairy tale for the New World.

HISTORICAL FICTION
Elizabeth Crook
The Which Way Tree: A Novel


Judge E. Carlton: How many times did you have contact with [Clarence Hanlin] after seeing him on the Julian?
Benjamin Shreve: It was ongoing, sir, after what my sister done to his finger. He was tracking us for two full days and a portion of another. On occasion he gave chase. There was words spoken. There was shots fired.

Fourteen-year-old Benjamin Shreve lives with his younger sister, Samantha, near Camp Verde, Texas. There are many things to be afraid of on the Texas frontier in the aftermath of the Civil War — “Indians and Sesech and bushwackers and vigilantes.” Benjamin is hunting for dinner when he stumbles upon Hanlin, wearing a Confederate uniform, picking the pockets of eight hanged men at Julian Creek. The next time Benjamin sees Hanlin, he and Samantha are trying to trap and kill a panther, the same panther that had mutilated Samantha and killed her mother several years ago, and had returned to bedevil what’s left of their farm. Hanlin is violently abusing an animal, and Samantha takes a shot at him. The ensuing altercation with Hanlin is interrupted by Mr. Pacheco, a Tejano man traveling on a fine horse with a complicated provenance. During the hullabaloo, the panther escapes, and the entire party, with disparate motivations, heads out to track it down.

The Which Way Tree: A Novel is new historical fiction from Austin’s Elizabeth Crook. It was inspired by an incident during which Crook’s son was lost in the same rough country portrayed in the novel. Search-and-rescue found her son several hours later, no worse for wear and tear, but they also found a mountain lion tracking the boy. The Which Way Tree is experience alchemized by imagination.

Crook had me from the beginning. The Which Way Tree is unlike anything I’ve read before. An epistolary novel, The Which Way Tree is comprised of letters from Benjamin which serve as his grand jury testimony in the matter of murder and highway robbery, in the County of Bandera, in April of 1866. Benjamin possesses a distinctive voice, and his testimony is often unintentionally humorous, in the way of earnest and honest children. Pathos is delivered in a matter-of-fact first-person narration by Benjamin. It’s through his observations only that we know Crook’s characters. Benjamin’s numerous digressions during his testimony serve as autobiography.

The action is suspenseful and fast-paced; the narrative flow seamless; the dialogue often laugh-out-loud funny (“Preacher Dobb said, Vengeance belongs to the Lord, Samantha. She said, Only if he can beat me to it.”); Benjamin’s developing relationship with the judge through his letters is sweetly affecting. Crook’s research is evident in the period details, rhythms of speech, and Texas history.

Benjamin notes that Samantha’s obsession with the panther is like that of Captain Ahab’s obsession with Moby-Dick. That story is an obvious parallel to The Which Way Tree; a less obvious parallel is Geoffrey Chaucer’s The Canterbury Tales. A diverse cast of travelers, on a journey in the same direction but for different reasons, with different backgrounds — including a Confederate soldier, a young Anglo boy, a young mulatto girl, a reformed minister, and a Tejano who reminds me of Rhett Butler—a reforming scalawag.

The Which Way Tree is an enthralling adventure, a Texas fairy tale in the truest sense of that term—not a Disney version, but a Brothers Grimm, Old World fairy tale for the New World.