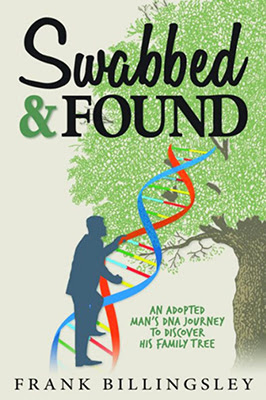 I reviewed Swabbed & Found: An Adopted Man's DNA Journey to Discover His Family Tree (Bright Sky Press) by Houston's Frank Billingsley for Lone Star Literary Life. This is a sometimes funny, sometimes moving, always engaging and entertaining memoir of one man's search for his origins.

On a chilly December afternoon in 2013, fifty-four-year-old Frank Billingsley, beloved weatherman at Houston’s KPRC since 1995, received an email that would fundamentally change his life. Billingsley, an adoptee, had always wondered about his biological family, but hadn’t pursued the answers because of the usual reasons: fear of hurting his adopted family; fear he wouldn’t like who he found; fear who he found wouldn’t want to be found. This curiosity waxed and waned over the decades, but the email promised that DNA testing could answer his questions. Simply swab your mouth and send it off. Billingsley’s need to know came roaring back, becoming an obsession that would devour the next year of his life.

Swabbed & Found: An Adopted Man’s DNA Journey to Discover His Family Tree is the story of Billingsley’s investigation. His story flows smoothly and quickly, with a teaser at the end of each chapter, a cliffhanger promising further revelations—and not a little drama. “Am I a product of a spring romance or a Spring Break dance?” Billingsley wonders. “Just who were those folks who had me, but couldn’t keep me? Or just didn’t want to keep me? Shouldn’t I get in touch to at least thank them for giving me a better life?”

The first-person narration is funny, thoughtful, and engaging. There are thrilling, jaw-dropping moments in what Billingsley refers to as “treasure hunt” mode, and there are tense moments, some with uncomfortable implications, when he feels selfish, remembering that “just because I wanted to know who I am, didn’t mean [they] wanted to know who [they weren’t].” When you’re clambering through your family tree, some branches are stronger than others.

Diagrams of Billingsley’s growing family tree appear regularly, making the narrative easier to visualize. A letter from the Arkansas Department of Human Services describing the circumstances of his biological mother’s pregnancy and his birth, reproduced in its entirety, is profoundly moving, a heartbreaking narrative of poverty and the breakdown of a family in extremis.

Billingsley is an engaging writer. The story of his wedding to Kevin, his partner for two decades, is sweet; his tales of Hurricane Ike are exciting and terrible. His biology lessons are fascinating and easily understood. He’s also frequently funny, and I laughed aloud regularly. In the dedication, he writes, “This book is dedicated to my family: All 17,538 of you whom I have found so far. Not to worry, I changed all your names.”

Swabbed & Found is a roller-coaster of conflicting emotions: frustration and relief, anxiety and joy. It requires courage to dive into family secrets, and requires the compassion to compromise. “If DNA stands for anything, I found,” Billingsley writes, “it is: Do Not Assume.”

He has advice for anyone tempted to follow his lead: DNA can be tricky, and most experts on the subject will tell you that nothing beats old-fashioned genealogy; DNA can confirm relationships, and never lies, but it doesn’t always connect the dots correctly; consider a therapist. “The Encyclopedia Brown adventure had begun to fade,” he notes, “when real names of real people with real lives and histories started showing up.”

On the other hand, he found an ancestor who fought at the Alamo, so it’s all good.