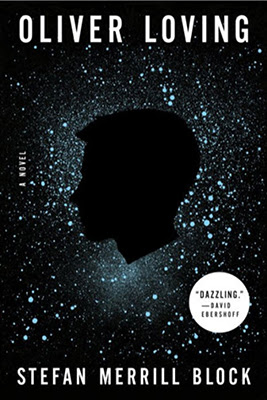 Oliver Loving is seventeen — an awkward, lonesome, aspiring poet with “a nearly anaphylactic aversion to prolonged eye contact,” in first-love with the mysterious new girl Rebekkah Sterling — when he walks into a high-school dance and never walks out. Hector, an enraged, deceived, despairing young man with a gun, cuts Oliver down, along with four others. Ten years later Oliver remains in a vegetative condition; one bullet has decimated his brainstem and, with it, his family.

Oliver’s first neural exam in several years is days away. Eve, Oliver’s mother, who visits her son daily, regards the exam with a “dread that [is] tidal and annihilating.” She clutches a hope that Oliver is still in that husk somewhere. To learn that he is not may snap the last thread of her sanity. The question in that room with Eve every day is, of course, Why?

Oliver Loving: A Novel is the extraordinary new book from award-winning author and Texas native Stefan Merrill Block. He explores what becomes of the living in the aftermath of tragedy; the duality of sustaining, cruel hope; and how indecision becomes, by default, decision. A many-layered story, Oliver Loving addresses the nature of consciousness, the animating force, and the limits of our knowledge. Immediately intriguing, opening with the narrator addressing Oliver in his hospital bed, multiple points of view and narratives weave the story of how Oliver was transformed into a legend, a myth, the “martyr of Bliss, Texas.”

Every life in this book is divided into before and after. Block’s characters are complex, flawed, damaged people with rich backstories, living inside a breaking-news crawl. We get to know Oliver through flashbacks to the autumn before. Charlie, Oliver’s younger brother, flees to New York City trying to claim a separate fate. Jed, their father, is a mostly-absent, failed and frustrated, drunken painter and erstwhile art teacher. Eve is vindictive and punishing, the walking wounded, made of breathtaking pain and bone-deep weariness, keeping score. Rebekkah walked out of the classroom where the shooting happened, and never spoke of it, “[her] silence … a godlike force, in which she could take infinite forms.” Robert Olen Butler says plot is simply “yearning challenged and thwarted.” And so Hector became plot.

Hector killed himself, robbing everyone of justice, maybe vengeance. Where to turn with the questions? What to do with the anger? The fictional Big Bend community searches for specific reasons “to ward off the vagueness of jingoistic nightmares” provided by politicians. The Texas governor said terrorism; others said immigration, guns, closeted gay romance, conversion to Islam. The issues are timely, to our everlasting shame, in “a country psychotically armed for end times.”

Oliver Loving is a study in mourning, grief and guilt, probing the possibilities of redemption and reconciliation. How do we live with chance, randomness, chaos? And if Oliver is still in there, wouldn’t that be “confirmation of an unthinkable horror, the most hideous solitary confinement?” Empathic, transporting, bold, and original, Block creates an immersive literary experience, terrible to contemplate, impossible to forget.