Review: INTO THE BLACK NOWHERE by Meg Gardiner 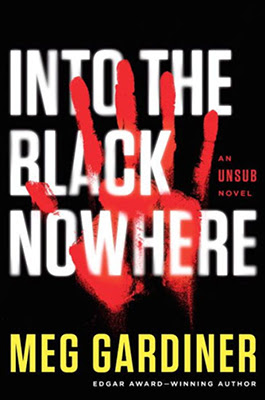 I reviewed Into the Black Nowhere: An UNSUB Novel (Dutton, Penguin Random House) by Austin's Meg Gardiner for Lone Star Literary Life. Gardiner skillfully builds tension as the pace accelerates toward the most dramatic, exhausting, and satisfying ending I’ve read in quite some time.

Shannon Kerber wakes in the night and discovers her infant daughter crying in the arms of a stranger seated on the living-room sofa. When Shannon’s husband returns from a San Antonio Spurs game, she’s gone, the baby cold and crying in the draft from the open front door. Shannon is the fifth abduction in the area in the last six months. Caitlin Hendrix, a newly minted special agent with the FBI’s Behavioral Analysis Unit (the famous profilers), heads to fictional Solace, Texas, to hunt a hunter.

Into the Black Nowhere: An UNSUB Novel is Meg Gardiner’s second installment in her new UNSUB series of thrillers, soon to be a CBS television series. Gardiner, a resident of Austin, is a New York Times bestselling-author and an Edgar Award winner (China Lake, Hodder & Stoughton, 2002). I was excited to learn that her newest novel is set in Texas, and Into the Black Nowhere does not disappoint.

With no witnesses and no forensic evidence, it’s as if these women have fallen through a rent in space and time. Lack of information spurs the rumor mill and, this being Texas, the occult is suspected. A local firearms instructor appears on television news to proclaim, “Satan is loose among us.” Apparently, you can shoot Satan dead with a handgun.

Gardiner is merciless with her characters, who are diverse and unusually complex for the genre. Hendrix is our heroine, but honorable mention goes to Special Agent Brianne Rainey. These are smart, tough, courageous women. The small-town Texas extras are authentically quirky.

While I was unimpressed early on with odd adverbs and clichés such as “he attacked cases like a hawk attacks prey,” Into the Black Nowhere quickly matures into a fast-paced, suspenseful part police procedural, part thriller. Just when you think you know where this is going, it disappears down an alley and reappears where you expect it least.

Gardiner draws us in gradually and then hooks us hard. The FBI criminology and technology are familiar from TV and movies, but Into the Black Nowhere goes beyond. The science is innovative and the technology fun, such as using football slant-routes and interception analysis to find a suspect in a crowd.

Gardiner has a sardonic wit. A sexy secretary wears a gold cross on a chain that “dipped into her cleavage like a meat thermometer.” Hendrix regards the suspect’s attitude as “Lord of all he surveyed, beloved of children and small animals and all the birds in the air.” She matches wits with this Ted Bundy–like suspect, creating a hybrid of frightening, comedic tension.

A startling variety of locations and landscapes adds interest. “As the rain turned to sleet, clouds snuffed the sunset and afternoon sank to charcoal darkness.” Sensory details create atmosphere. As search dogs advance through the preternatural hush of the forest, “the clasps of their leads click against their harnesses.”

Into the Black Nowhere is nicely plotted and unusually structured. Gardiner skillfully builds tension as the pace accelerates toward the most dramatic, exhausting, and satisfying ending I’ve read in quite some time. Woman power, y’all.