Review: THE LAST SHERIFF IN TEXAS by James P. McCollom 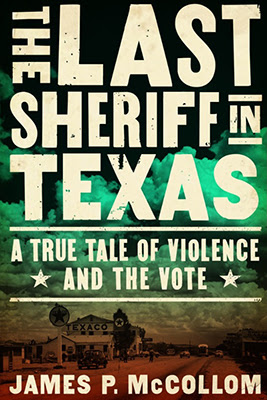 I reviewed The Last Sheriff in Texas: A True Tale of Violence and the Vote (Counterpoint Press) by James P. McCollom for Lone Star Literary Life! McCollom's book is a valuable chapter of South Texas history, the patron system of vote fraud (think box thirteen and LBJ), and the nascent struggle for Mexican American civil rights. Bonus: it's consistently entertaining.

My dad, former deputy sheriff of Mitchell County, Texas, always said everything that happens in the big city happens in small towns, just not as often. The small towns in Bee County, Texas, were presided over by Sheriff Vail Ennis from 1945 until 1952. Ennis was a legend in his time, and his most dramatic exploit is also the beginning of this true story. Shot five times by an ex-con at a Magnolia station in Pettus, a wide spot in the road, on a cold November night in 1947, Ennis managed to empty his gun, reload, and kill both attackers before the ambulance arrived to speed him to a hospital.

The Last Sheriff in Texas: A True Tale of Violence and the Vote by Beeville native son James P. McCollom is told through the actions of two men, Sheriff Ennis and Beeville’s hometown-boy-made-good Johnny Barnhart. In the beginning it’s not clear what Barnhart’s part in the drama will be; we meet him as a yell leader and fraternity boy, then a law student, at the University of Texas at Austin. Barnhart returns to Beeville with his juris doctor, hangs out a shingle, and is promptly elected to the Texas lege, where his principles and idealism get him branded a subversive and smeared as a Commie during McCarthy’s Red Scare. Barnhart returns home to practice criminal-defense law, which is how he discovers Sheriff Ennis’s pervasive power. Ennis is arrester, jailer, bondsman, probation supervisor, judge, jury, and—this is where things get really hairy—executioner. Before Ennis leaves office, he will kill eight men.

Barnhart, reckoning the sheriff and the town complicit in the reign of a homicidal menace, wages a campaign against Ennis in 1952. “Sheriff Vail Ennis, the protector of our wives and mothers and sisters and daughters,” McCollom writes, ”was under attack by Johnny Barnhart, the Mexican lover, the communist, the protector of deviants.” Barnhart finds himself battling “peripheral codes, imprecise but understood, that gave Texas its character, that kept Texas free from Yankee squeamishness.” If Ennis is wrong, then Texas is wrong. Before the election is over, Barnhart will fear for his life.

With a cover that’s half sepia and half the black-and-blue of storm clouds and bruises, the design of The Last Sheriff in Texas echoes McCollom’s style, a hybrid of old-timers sitting on the front porch telling tales and true crime. The book is consistently entertaining and a valuable chapter of South Texas history, the patron system of vote fraud (think box thirteen and LBJ), and the nascent struggle for Mexican American civil rights.

McCollom’s tone occasionally drips with derision, usually with good cause. The narrative is sometimes repetitive, the sequence of events not always easy to follow, but it’s difficult to say whether this is the author’s fault or the result of byzantine South Texas politics. A couple of geography mistakes stand out.

However, McCollom skillfully conveys the personalities of his large cast of fascinating characters. He conjures a visceral sense of foreboding as the election approaches, and evokes the time and place with rich detail and personal experience. In the author’s note, McCollom claims the background of his book as memoir—he knew many of the people he writes about. His grandfather was Bee County sheriff prior to Ennis who “it was said never [fired] his gun.” McCollom has a dog in this hunt.

In the end, against the backdrop of a rapidly modernizing and urbanizing Texas, Sheriff Vail Ennis failed to recognize his time had passed, becoming a walking anachronism. The Last Sheriff in Texas takes place in the middle of the last century and remains sadly relevant today.