BONNIE AND CLYDE:
Resurrection Road
Book One in a New Trilogy
by
CLARK HAYS AND KATHLEEN McFALL 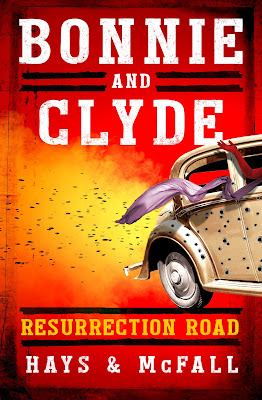 In an alternate timeline, legendary lovers Bonnie and Clyde are given one last shot at redemption.

The story begins in 1984 when a reporter gets a tip to meet an old woman at a Texas cemetery. Cradling an antique rifle and standing over a freshly dug grave, the old woman claims to be Bonnie Parker. Turns out, she says, it wasn’t Bonnie and Clyde who were ambushed fifty years earlier. Instead, the outlaws were kidnapped, forced into a covert life and given a deadly mission—save President Roosevelt from an assassination plot financed by industrialists determined to sink the New Deal.

Thrust into a fight against greed they didn’t ask for, but now must win in order to save themselves and their families, will the notorious duo overcome their criminal pasts and put their “skills” to use fighting for justice for the working class?

Cutting back and forth between the modern era where the shocked reporter investigates the potential scoop-of-the-century, and the desperate undercover exploits of Bonnie and Clyde in 1934, Resurrection Road is a page-turning sleep-wrecker.

Bonnie and Clyde. Saving democracy, one bank robbery at a time.

“A Depression-era tale timely with reflections on fat cats and a rigged economic system that still ring true. More than that, the story is an exciting ride, with tight corners, narrow escapes, and real romantic heat between Bonnie and Clyde. Outlaws become patriots in this imaginative, suspenseful what-if story,” -- Kirkus Reviews

EXCERPT from Bonnie and Clyde: Resurrection Road
By Clark Hays and Kathleen McFall

This scene is at the book’s beginning when Royce Jenkins, the reporter, first stumbles on the big story about Bonnie and Clyde never dying. Royce and “old” Bonnie are talking in a cemetery over the freshly dug grave of Clyde Barrow. The year is 1984.

“I know who you are,” she said, a southern drawl dripping warmth from the edge of her words. “Royce Jenkins. You write some history articles for The Dispatch, along with obituaries, high school football scores and, occasionally, recipes. You’re not half-bad—for a newspaperman, I mean.”

She laughed again. “I’ve had more than my share of run-ins with the press. But my husband, God rest his soul”—she looked toward the grave—“my husband thought pretty highly of you after that piece you did on Texas prisons. You got a lot of that right.”

“Not many people remember that article, at least according to my editor,” he said, tilting his head toward the grave. “So, that’s your husband?”

“My one true love,” she said. “We were together for more than fifty years. Sometimes you’re lucky enough to find the person you’re meant to be with right off.”

“Can’t think of a better place to kill yourself than a graveyard.”

“I don’t mean to sound crass, but lots of people fall in love and stay together a long time, and then die,” Royce said, pulling out a cigarette. “You said you had a big story for me.”

He was having serious second thoughts about driving all the way out here.

“The biggest story you’ll encounter in your life, but first I was hoping you could help me.” She pulled one of the shovels out of the fresh dirt and handed it to him.

“You want me to help bury him?” Royce asked. “That’s a little outside my job description, and anyway, why not just let those two strapping young men earn their pay?”

“Because I don’t want them to steal the guns,” she said. “They’re old, but they still work. He cleaned them nearly every day.”

She bent down, unzipped the duffel bag, and pulled out two rifles, each almost as long as she was tall. She handled the heavy guys with an ease born of familiarity.

“Yep, BARs,” she said. “Browning Automatic Rifles, chambered in 30.06. He loved them almost as much as he loved me.” She tossed them into the grave, where they landed on top of the coffin with a clatter.

He turned to look more closely at her, a thousand questions forming, but they died in this throat when he saw she was now holding a pair of well-used Colt .45s with the same unsettling ease, one in each hand. She tossed them in after the rifles. “He wouldn’t feel safe without his guns, even in heaven. At least I hope that’s where he’s going. Seems like we atoned enough for our sins.”

The old woman bent over the duffel bag again, pushing the sleeves of the mink coat back to her elbows, and he half expected her to pull out grenades next, but instead she extracted a bouquet of red roses. Even behind the veil, he could see tears forming, but somehow it only made her seem fiercer. She tossed the flowers into the grave on top of the guns. “I love you, Clyde,” she whispered.

He looked at the tombstone, confused. It read: “Here rests Clarence Prentiss. May he finally find peace.”

“I love you more now than the day we met,” she said, voice breaking. “And I don’t regret a single goddamn thing. Not even from when we first started out.” She glared at Royce. “Well, don’t just stand there watching me bawl, start shoveling.”

He flipped the cigarette and turned his attention to the grave, slinging in dirt. She took up the other shovel and followed suit, matching his pace until the guns and roses were gone from sight, hidden under the freshly turned earth.

When the grave was filled, he dropped the shovel and looked at the angry blisters rising up on his palms. “Who was your husband?” he asked, wiping the sweat beaded on his brow. “And what’s with the guns?”

She was winded but hid it well with a stubborn jaw. “His name is—was—Clyde Barrow,” she said.

“No, not the same as,” she said. “The original. My name is Bonnie Parker. Although around here, they know us as Brenda and Clarence Prentiss.”

“In the flesh—at least what’s left of it.”

“Fifty years ago exactly,” she said. “He always knew how to make an entrance. And an exit, I guess.”

“I told you it was a big story,” Bonnie said. “Now that Clyde is dead, I plan to tell the truth. I never cared much about what happened to me, but there was no way he was going back to prison.” 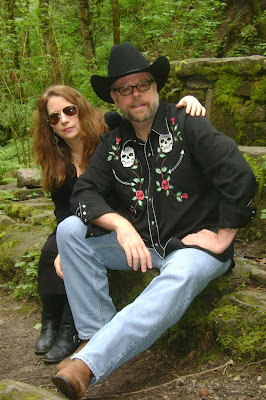 A native of Texas, Clark Hays spent his early childhood there and then moved for a decade with his family around the world following the job of his father, a legendary wildcat petroleum drilling engineer, before finally landing on a Montana ranch. Kathleen McFall was born and raised in Washington, D.C.

Between the two of them, the authors have worked in writing jobs ranging from cowboy-poet to energy journalist to restaurant reviewer to university press officer. After they met in the early 1990s, their writing career took center stage when they wrote the first book in The Cowboy and the Vampire Collection as a test for marriage. They passed. Their debut novel was picked up by Llewellyn (St. Paul, MN) with a first edition published in 1999, making it among the earliest stories in the resurgence and reimagining of the undead myth for modern audiences.

Since then, Clark and Kathleen have published five novels together—the latest reimagines the life of the legendary outlaws Bonnie and Clyde.

Clark and Kathleen have won several writing awards, including a Pushcart Prize nomination (Clark) and a fiction fellowship from Oregon Literary Arts (Kathleen). Their books have been honored with a Best Books of 2014 by Kirkus Reviews, Best Books of 2016 by IndieReader, and a 2017 Silver IPPY Medalist.