Review: WHAT UNITES US by Dan Rather & Elliot Kirschner 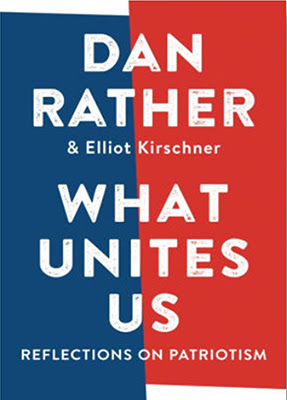 I reviewed What Unites Us: Reflections on Patriotism  (Algonquin Books) by Dan Rather and Elliot Kirschner for Lone Star Literary Life. This collection of essays is passionate, eloquent, and urgently felt. Highly recommended as a gift for graduates.

“Who can say definitely when and how it begins, that first, faint sense of place, of belonging; that trickle that eventually becomes a wellspring of deep emotional ties to one’s homeland?”

What is Patriotism? This is the question Dan Rather examines in What Unites Us: Reflections on Patriotism, the new collection of sixteen essays written with his longtime collaborator Elliot Kirschner. “It is important not to confuse ‘patriotism’ with ‘nationalism,’” Rather says. Then he separates Patriotism into what he believes are its five essential components: Freedom, Community, Exploration, Responsibility, and Character. These five components are further subdivided into such subjects as voting, dissent, immigration, the arts, service, and education. Rather feels that Americans are being tested and there’s a task before us. He also believes that we are up to the challenge.

Rather writes passionately and eloquently about his sense of urgency that moved him to write this book, stirring me to tears at times. His “greatest desire for this book is that it encourage conversation and debate about what it means to be an American today.” Rather’s career is currently enjoying a renaissance, especially his Facebook notes. At eighty-six, he is Texas’s elder statesman of journalism. His life has spanned enormous changes in our world, and his career has allowed him a front-row seat to many of them. Rather’s vantage point offers a sweeping view of these transformations, from his Great Depression and World War II childhood, to the beginnings of his career when he reported on civil rights, the assassination of JFK, and the Vietnam War, through Watergate, Iran-Contra, hanging chads, and the terror attacks of 9/11. What Unites Us benefits from these experiences as Rather illustrates many of his subjects with examples from Texas history and his childhood in East Texas during Jim Crow.

There are a few valuable, concise history lessons in What Unites Us, including immigration, Carnegie libraries in Texas, and public education. Rather is mostly balanced in his writing without resorting to the spreading plague of false equivalency. A man after my own heart, he includes an entire essay devoted to books. He urges us to return to the audacity of big ideas and exploration, but simultaneously “steady as she goes.”

What Unites Us is not a work that breaks new ground. The collection is basic, or it should be. Our current times are infected by willful ignorance and aggressive hostility. Rather emphasizes the “purgatory of tolerance” as not good enough, and he is correct—our goal should be inclusion. We should love our country like adults, not like a four-year-old loves his mother. As Rather writes, “I see my love of country imbued with a responsibility to bear witness to its faults.”

Save Oh, the Places You’ll Go for your kindergartner; What Unites Us would be a terrific gift to ground high school graduates in the principles of good citizenship. “We are bound together by a grand experiment in government, the rule of law, and common bonds of citizenship,” Rather writes. “This is what it means to be an American.”

Posted by Texas Book Lover at 8:04 AM