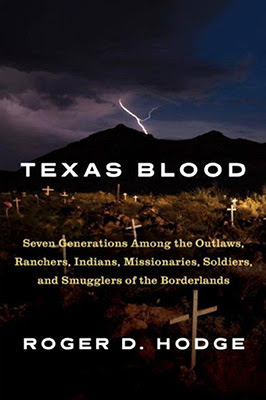 I reviewed Texas Blood: Seven Generations Among the Outlaws, Ranchers, Indians, Missionaries, Soldiers, and Smugglers of the Borderlands (Alfred A. Knopf) by Roger D. Hodge for Lone Star Literary Life. The story of Hodge's family is a microcosm of the settlement of the American West, and his writing is frequently mesmerizing.

Texas, with its expanses of still-wild vistas, lends itself to the mythical. Historical attempts to settle and tame the borderlands have often proved ephemeral. The evidence is found in pictographs and petroglyphs (“North America’s oldest surviving books”) throughout the Trans-Pecos. But Rodger D. Hodge’s family, arriving in the Devils River country in the second half of the nineteenth century, settled and stayed. Why? Why this land? What possessed them to choose such a forbidding landscape, which remains “fantastically inaccessible,” on which to stake their future, working Brangus cattle, Rambouillet sheep, and Angora goats?

When he was named editor of Harper’s Magazine in 2006, Hodge was surprised to be described as a “Texan” by a New York Times reporter. “I never expected to be a professional Texan,” he writes, “one of those writers who wear the lone star like a brand.” Who am I? How does the place you are from shape you? Why did Hodge’s ancestors come to Texas? He seems to be trying to make his peace with something, but we’re never quite sure what.

Texas Blood: Seven Generations Among the Outlaws, Ranchers, Indians, Missionaries, Soldiers, and Smugglers of the Borderlands, the latest nonfiction from The Intercept’s Hodge, is a combination of journalism and memoir, producing an expansive—almost panoramic—history of Texas viewed through the lens of Hodge family history. The story of his family is a microcosm of the settlement of the American West.

Needing more than “epic histories sweep[ing] high above the hard ground of lived experience,” through six states and fifteen Texas counties, Hodge drives in the footsteps of his predecessors, beginning in Missouri, following the Osage Trace to Texas. Having no primary source from his relatives, Hodge employs a Washington Irving (who met Sam Houston) account of his travels on the road to Texas, and Frederick Law Olmsted’s account of his travels through Texas, to illuminate the Hodge pioneer journey.

Enhanced by maps and photographs, especially an arresting cover photo of a cloud-to-ground lightning strike in the West Texas mountains lighting up a field of wooden crosses in the foreground, Texas Blood is often mesmerizing, intermittently overwrought, always evocative. Hodge is capable of the lyrical (“the stream turbulent, rapid, pink with mud and minerals, alkaline and briny, searching for the crossing”), though his is an unsentimental journey. Sometimes terse, sometimes voluble, Hodge can drip with derision (“Quakers and German liberals and utopian Frenchmen and Poles who sought to create a New Jerusalem but instead simply added to the entrepreneurial energies of Dallas”), as well as inspire, as in the title of the first chapter, “Southwest Toward Home,” with its nod to Willie Morris’s North Toward Home.

Though it can be frustrating and ends abruptly, feeling unfinished, Texas Blood is a remarkable synthesis of the general and the personal, the concrete and the metaphysical.