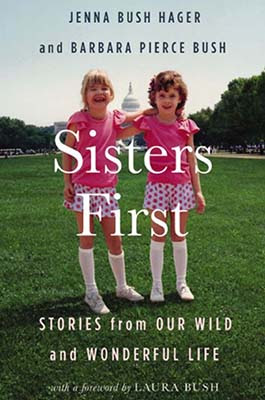 Sisters First: Stories from Our Wild and Wonderful Life is the new memoir from twin sisters Jenna Bush Hager and Barbara Pierce Bush, daughters of former United States president George W. Bush and former first lady Laura Bush, who penned the foreword, and of whom Barbara writes, “beneath her flats and cardigans, my mom is in fact our closet hippie and Rastafarian.” Written in the thirtysomething siblings’ alternating voices, the first-person narrations are sometimes gregarious, sometimes introspective, often deeply personal — gently but firmly casting aside stereotypes, and drawing back the curtain on what have already been extraordinary lives.

A very pretty book, the memoir includes many cute, candid photos of the sisters and their parents, as well as the extended Bush clan. In a nice touch, it also includes reproductions of letters (grandmother and former U.S. first lady Barbara Bush’s nickname is the “Enforcer”), texts, emails (grandfather and former U.S. president George H. W. Bush signs himself “Grampster”), and even wedding toasts. The title is borrowed from the concluding line in Mary Oliver’s poem “The Summer Day.”

The memoir is arranged loosely in chronological order, but more importantly by subject, the text reading like essays, almost like diary entries. Subjects include the sisters’ experiences of Secret Service protection; the election night of 2000; campaigning in 2004; the terrorist attacks of September 11, 2001; and thoughts on the Iraq War. They don’t shy away from their father’s former alcohol problems or their own youthful transgressions.

Jenna and Barbara are fraternal twins who arrived a few weeks early and were named for their grandmothers, and whose earliest memories are from Midland, Texas, and Kennebunkport, Maine. The sisters’ different personalities come through clearly.

Barbara, the “little girl [with a] big name” (pizza places would hang up on her when she called to order), writes lyrical descriptions of Maine childhood summers, movingly of a teenage friend’s suicide, hilariously of living with Secret Service protection (“Who better to ask for male relationship advice than the two guys sitting in the front seat of the car with you?”). She debunks assumptions that policies and opinions are passed down genetically (“political DNA”).

Jenna tells of the sisters’ first separation when they were six years old and went to Camp Longhorn during the summer, her confusion at seeing the Grampster on the cover of Newsweek branded with “Wimp,” and that time her date (now her husband) ran out of gas on an incline and rolled backwards into the Secret Service’s armored Suburban. Jenna endears with self-deprecating asides.

Now Jenna is married with two small daughters of her own, reporting for NBC; Barbara is the CEO and cofounder of Global Health Corps, which works for health equity around the world because “health is a human right”; the sisters live four blocks from each other in New York City.

And, y’all, the White House is haunted.