Review: THE GIRLS OF THE GOLDEN WEST by James Ward Lee 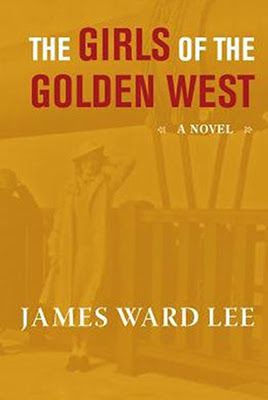 I reviewed The Girls of the Golden West (TCU Press) by James Ward Lee for Lone Star Literary Life. This is sweetly satisfying debut fiction from the eighty-five-year-old founding director of the University of North Texas Press, and member of the Texas Institute of Letters and the Texas Literary Hall of Fame.

Ninety-five-year-old John Quincy Adams the Second (no relation) is contentedly living his “platinum years” in fictional Bodark Springs, Texas. Wealthy due to inheritance, and rich due to a long career teaching English and history, John Q. opens his door one evening in 1971 to doctoral student Annie Baxter on his doorstep. Armed with a grant from the Texas State Historical Association and the Texas Folklore Society, Baxter wants to interview John Q. for an oral history of Northeast Texas. John Q., startled by Annie’s resemblance to Elizabeth Denney, his lost love of forty years ago, reluctantly agrees to participate in the project, with one proviso: Baxter must content herself with John Q.’s tales of others; his personal history is off limits.

Edward, a lawyer and John Q.’s oldest son, knows his father has secrets. John Q. did spend two years in California soon after the murder of his father and uncle. But Edward doesn’t know the facts and, suspicious of Baxter’s sudden appearance (“secret agent or a blackmailer or maybe a hit woman”), is concerned his elderly father, reminded of the love of his life, will introduce the skeletons in his closets to the fetching Annie. When anonymous notes and phone calls arrive, obliquely referencing his secrets, John Q. worries he may be called to account for a blood feud that may not be over.

Preeminent Texas folklorist James Ward Lee, founding director of the University of North Texas Press and Center for Texas Studies at UNT, member of the Texas Institute of Letters and the Texas Literary Hall of Fame, is the author of more than one hundred articles and the author or editor of eleven books. Now, at age eighty-five, Lee has published his debut novel, The Girls of the Golden West.

Lee’s characters are well developed and intriguing. The population of Bodark Springs is portrayed sympathetically and appreciatively. John Q.’s charming first-person narration is funny and wise and vulnerable. He often quotes song lyrics, prose, and poetry, indulging in clever wordplay and inventing a new collective noun: a “disturbance of women.” You know, like a pod of whales or a pride of lions.

The Girls of the Golden West moves at a steady, genteel pace. I was sometimes impatient with the pacing and the preoccupation with wardrobe and dinner menus, but Lee’s plot twists held my attention. Lee scatters clues, skillfully foreshadowing the mystery of John Q.’s missing years. The dialects he employs beg to be read aloud, and his dialogue is smart and funny. John Q. complains to one of his sons that he only wants them “to let me alone to rust unburnished.” A housekeeper confuses her words, resulting in this hilarity: “Do you reckon there was some fortification going on? I always thought that old man was too old to fortify.”

Using the oral-history project premise, Lee deploys an entertaining technique for liberally seeding The Girls of the Golden West with rich details of weddings, funerals, entertainments, religion, remedies, art, and politics from his encyclopedic knowledge gathered during a storied career as a folklorist. The resolution of John Q.’s story is sweetly satisfying.